Opened in 1902, Albuquerque’s Alvarado Hotel was the stuff of legend. Graciously designed with shaded portals, bell towers, fountains, and immaculate rooms, it was a gem of the Santa Fe Railway and Fred Harvey Co. Its Indian and Mexican Rooms were filled with museum-quality Native arts and crafts, opening a previously untapped market for the public and for the craftspeople. Native Americans created jewelry and blankets on-site, and visitors could watch them weave their magic. Its glory years didn’t last, however, and the building was lamentably demolished in 1970.

At 2 pm, on Sunday, June 21, Deb Slaney, curator at the Albuquerque Museum of Art and History and author of Jewel of the Railroad Era: Albuquerque’s Alvarado Hotel, speaks on "Furnishing the Alvarado Hotel: A Material Culture Tour," in the History Museum auditorium. Part of the exhibit, Setting the Standard: The Fred Harvey Company and Its Legacy, her lecture is free with admission; Sundays free to NM residents. Seating is limited. Make a reservation by calling (505) 476-5152. 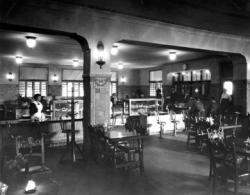