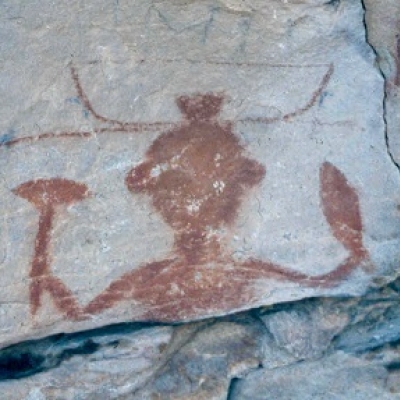 
Today’s Galisteo Basin is a vast and inspiring landscape on the edge of Santa Fe. Open range land has preserved a record of history that is a remarkable testament to powerful influences, natural and cultural, from the fifteenth through seventeenth centuries. These three centuries encompass dramatic changes in climate, economy, population, and organization of Pueblo communities, even before the initial Spanish expeditions of the sixteenth century.

Eric Blinman Director, Office of Archaeological Studies will discuss how the Seventeeth century Spanish Colonization changed the trajectory of Galisteo Basins cultural history in both expected and unexpected ways, culminating in the Pueblo Revolt of 1680. But perhaps the most dramatic transformation occurred in the few years immediately after the Revolt. By the Reconquest, the large Pueblo communities had moved north, setting the stage for the Euroamerican-dominated pastoral landscape of today

Dr. Eric Blinman was appointed director of the OAS in 2006 upon the retirement of Dr. Timothy D. Maxwell. Eric has been involved in archaeology in the western United States since 1967, focusing on Ancestral Puebloan archaeology since 1979. His undergraduate training was at UC Berkeley, and his graduate degrees in anthropology are from Washington State University. Eric joined the OAS staff in 1988 and served as an acting director for the Museum of Indian Arts and Culture in 1999. His research activities have included paleoclimate studies, tribal consultations, archaeomagnetic dating, and reconstructions of the social history of Puebloan peoples. However, he is probably best known for his research on pottery and textiles and for his participation in OAS educational programs throughout New Mexico. In the summer of 2007 he participated in a colloquium, Past Climate Change: Human Survival Strategies, hosted by the king of Sweden, Carl XVI Gustaf, in Narsaq, Greenland.