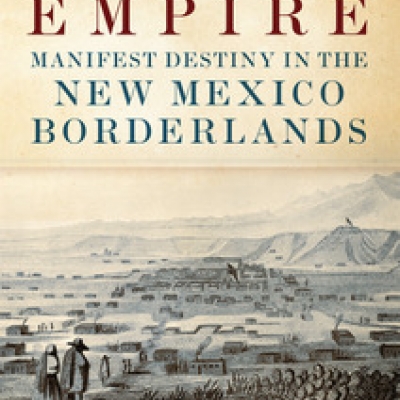 New Mexico was an early proving ground for Manifest Destiny, the belief that U.S. possession of the entire North American continent was inevitable.The federal government’s military and political commitment to the territory stemmed from its importance to U.S. expansion.

Americans wanted California, but in order to retain possession of it and realize its full economic and geopolitical potential, they needed New Mexico as a connecting thoroughfare in their nation-building project. The use of armed force to realize this claim fundamentally altered New Mexico and the Southwest.

Soldiers marched into the territory at the onset of the Mexican-American War and occupied it continuously for the remainder of the century, leaving an indelible imprint on the region’s social, cultural, political, judicial, and economic systems.

Dr. Kiser was born and raised in Las Cruces and graduated from New Mexico State University before going on to earn his doctorate in history at Arizona State University in 2016. He is currently an assistant professor of history at Texas A&M University-San Antonio. He is the author of four books on nineteenth-century New Mexico history: Turmoil on the Rio Grande (2011); Dragoons in Apacheland (2013); Borderlands of Slavery (2017), and most recently, Coast-to-Coast Empire. His current book project involves Civil War diplomacy in the U.S.-Mexico Borderlands and will be published by the University of Pennsylvania Press.