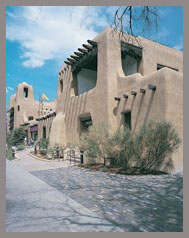 The New Mexico Museum of Art houses more than 20,000 works of American and European art, including paintings, prints, drawings, sculpture, photographs, new media, and conceptual works. The focus of the collection is on American art, with an emphasis on artists working in the Southwest.

The New Mexico Museum of Art is the oldest art museum in the state. It was founded in 1917 as the Art Gallery of the Museum of New Mexico. Housed in a spectacular Pueblo Revival building, it is a masterpiece of Pueblo Revival architecture, and the best representation of the synthesis of Native American and Spanish colonial design style. It was designed by I. H. and William M. Rapp and was based on their New Mexico building at the Panama-California Exposition (1915). The museum's architecture inaugurated what has come to be known as "Santa Fe Style." For more than 90 years, the Museum has collected and exhibited work by leading artists from New Mexico and elsewhere.

The museum has more than 20,000 works of American and European art in its collection, including paintings, prints, drawings, sculpture, photographs, new media, and conceptual works. Its collection focuses on American art with an emphasis on artists working in the Southwest, including Georgia O’Keeffe, Edward Weston, Laura Gilpin, Agnes Martin, Luis Jimenez, Luis Tapia, Bruce Nauman, Meridel Rubenstein, and Ana Mendieta among others.

The architecture of St. Francis Auditorium, part of the museum, was inspired by Spanish colonial churches. The auditorium is also a venue for other outstanding performance groups and lectures on art and culture. It seats 435 and houses the large historical McNary pipe organ and a stage.

Adventurous Approaches to Photography of the 1960s and 1970s on view at New Mexico Museum of Art in Santa Fe, opening July 23, 2022

New Mexico Museum of Art Readies for The Railyard Renaissance

New Mexico Museum of Art awarded a $250,000 “Museums for America” grant for conservation and digitization of photography and contemporary artwork

“Storytellers: Narrative Art and the West” Set to Open at MOA

Exhibition about Breath opens at New Mexico Museum of Art