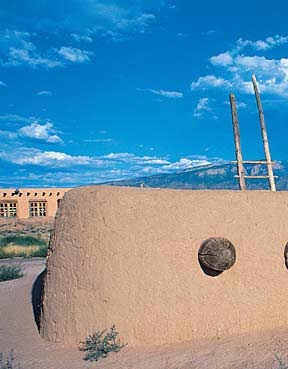 Just minutes north of Albuquerque (off of I-25, exit 242) in Bernalillo, is Coronado Historic Site, where Francisco Vásquez de Coronado—with 300 soldiers and 800 Indian allies from New Spain—entered the valley while looking for the fabled Seven Cities of Gold. Instead he found villages inhabited by prosperous native people. Coronado's party camped near the Tiwa pueblo of Kuaua, one of the many villages encountered by the explorers.

Kuaua is an earthen pueblo excavated in the 1930s by WPA workers, who also reconstructed new ruin walls over the reburied original ruins. A square kiva, excavated in the south plaza of the community, contained many layers of mural paintings. These murals represent some of the finest examples of Pre-Columbian mural art in the Untied States. Both the kiva and one of the mural layers are reconstructed and open to visitors, while several of the preserved mural segments are open to viewing in the mural room of the visitor center. The visitor center, designed by noted architect John Gaw Meem, also contains prehistoric and historic Indian and Spanish colonial artifacts on exhibit with several hands-on components.

The monument site also has ramada-covered picnic tables with a magnificent view of the Rio Grande. Enjoy the history and beauty of Coronado Historic Site, along with the many other attractions on the Camino Real and Jemez Mountain Trail National Scenic Byways in Sandoval County, New Mexico.