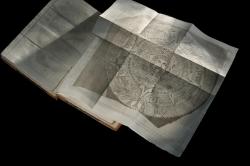 The first book about the Aztec Calendar Stone. Buried about 1550 by order of the Archbishop of Mexico, the stone was rediscovered in 1790 in Mexico City. A proposal to turn it into a cathedral step to symbolize the triumph of Christianity over the pagan Aztecs was rejected after authorities became convinced it was an astronomical and mathematical device worthy of preservation. It was, in fact, a sacrificial altar commissioned by Moctezuma II, and remains the best-known Native American artwork of the period. The exhibit Imagining Mexico presents the first engraving of the sculpture, made by a Mexican artist best-known for his images of the Virgin Mary and Catholic saints.
Photo by Blair Clark, New Mexico Department of Cultural Affairs