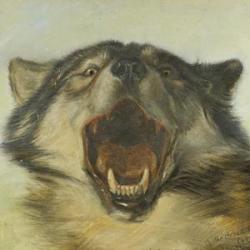 Hired to kill wolves on a ranch in northeastern New Mexico, Seton was transformed by the death of a wolf he named “Lobo” and wrote of in “Black Wolf of the Currumpaw.” Publication of that story in Scribner’s Magazine drew worldwide acclaim and set Seton on a path to becoming one of the foremost voices for wildlife conservation in America. Later, Seton would use the wolf paw print as part of his signature.