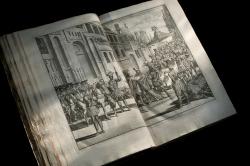 Cortés received by Moctezuma II Engraving 1724 (Jacobus Schijnvoet 1685 – 1733)
Hernán Cortés met Emperor Moctezuma II on a causeway leading to Tenochtitlan, the capital of the Aztec empire, on Nov. 8, 1519. Although there are no known images of the meeting, it was commonly depicted in accounts of the Conquest, such as that of Antonio Solis. Moctezuma II is depicted here the way many European artists of the period showed Native Americans, dressed in a feather skirt and a feather headdress. The emperor’s pointed crown is an accurate detail.
Antonio de Solis, The History of the Conquest of Mexico by the Spaniards (1684). Translated from the original Spanish by Thomas Townsend. London: Printed for John Osborn, at the Golden Ball in Pater-Noster Row, 1724.  Fray Angélico Chávez History Library NMHM, John Bourne Collection 972.02 S687Et v. 2
Photo by Blair Clark, New Mexico Department of Cultural Affairs