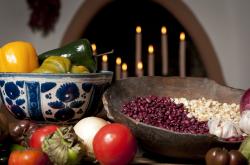 
Seen here are the indigenous foods which might have been seen in a New Mexico kitchen with a wooden bowl. The introduction of ceramic kitchen and tableware was a Spanish influence, with the blue and white on this talavera bowl influenced by Chinese designs.