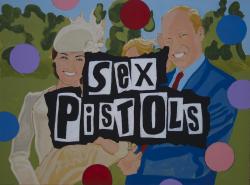 From the press release:
I-Witness Culture: a Solo Exhibition of the Unique Brand of Work Of Frank Buffalo Hyde Opens at MIAC

In 1977, the Sex Pistols released a single titled “God Save the Queen” signaling the beginning of the punk rock movement that rejected conformity and the establishment. They used a black-and-white graphic portraying Queen Elizabeth with the title and band name scrawled over her eyes and mouth. The British Empire has a long history of colonization that stretched around the world, including Canada and North America. Fast forward to present day, the royal family has little power, but are worshipped in our celebrity-obsessed society as the epitome of elegance and privilege.