Gustave Baumann, a Santa Fe Legend, was an artist of many trades. His work included printmaking, painting, and marionette-making. Baumann hand-carved and decorated wooden puppets called marionettes and brought them to life in live performances. Some characters were tall and skinny, others were short and stout, some were animals and some were humans, but all had a personality and story of their own. He created a traveling marionette theater complete with scripts, costumes, props, backdrops, scenery, and a stage. Over a twenty-year period, he created nearly 100 marionettes; however, he was not a puppeteer. He left the actual performances to his wife Jane and Teatro Duende. In 1932 the Baumann Marionette Christmas Show at the New Mexico Museum of Art (NMMoA) became a cherished community tradition. 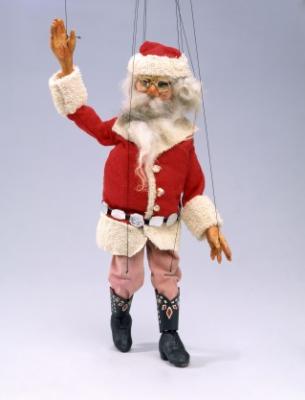