Alcalde, NM – New Mexico Historic Sites (NMHS) announces that Rebecca Ward has been promoted to the role of instructional coordinator at Los Luceros Historic Site (LLHS). Ward had previously been the interpretive ranger at LLHS since February 2020. She assumed her new role on September 5, 2022.

“I am thrilled to see Rebecca shine in this new role,” said Carly Stewart, the site manager for LLHS. “She is a wealth of knowledge and a great help to every visitor who walks through the door. I am excited to see what new programs she comes up with!”

In the NMHS system, instructional coordinators play a pivotal role in connecting the public with the sites’ history and resources. They develop special events and public programming, coordinate on- and off-site educational resources, and help guide engagement and interpretation.

Ward has a Bachelor of Arts degree in Anthropology and a Master of Arts degree in Museum Studies. Prior to her time with New Mexico Department of Cultural Affairs, she worked at Washakie Museum and Cultural Center, a small non-profit museum in Worland, Wyoming, as its sole educator. She ran summer camps, conducted exhibit tours, and worked with the public to answer questions about the Big Horn Basin’s cultural and natural history. Ward has also worked in the National Park Service as a ranger at Mesa Verde National Park in Colorado and the Boston Harbor Islands National Recreation Area in Massachusetts, as well as interning with Chaco Culture National Historical Park as part a Student Conservation Association program and Petroglyph National Monument in their museum and archival collections spaces.

“I am looking forward to taking on more responsibility at Los Luceros Historic Site,” Ward said. “The history here is so rich and varied that the topics for education are pretty limitless! I’m excited to work with children more. I find that kids have the best questions about things. They always bring me a new way to look at the site.”

In her spare time, Ward loves to cook, bake, read, and travel. 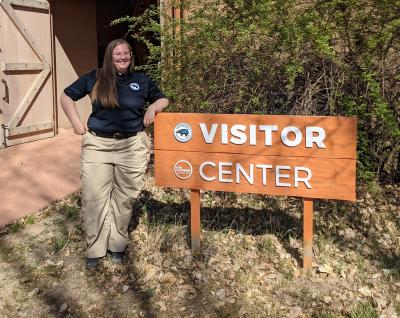