A beautiful show of 27 woven works of art is the result of a collaborative effort by members of the Mesilla Valley Weavers Guild.

“Local Color: Landscapes and Architecture” opens in the New Mexico Farm & Ranch Heritage Museum’s Arts Corridor on Dec. 13. A free opening reception with refreshments is from 2:30-4:30 p.m. on Sunday, Dec. 15.

The highlight of the show is an 84-inch x 93-inch community collaborative piece called “Blue.” Members of the guild each contributed, as well as community members who were invited.

“We wanted all members to contribute to a single piece and we chose blue,” said guild member John Garrett. “It’s a rich color to work with and it features mountains, the sky … water. There’s also music blues and blue moods. We decided to do squares for simplicity sake. It’s all connected."

Garrett said the title of the show reflects the theme behind this collaborative effort.

“So many responded about the color in their work,” he said. “And where does color come from? Largely, the landscape. We also included the structural aspect of architecture. Not with bricks and mortar, but thread by thread.”

The organization was formed to encourage interest in the artistic and technical development of the fiber arts and to raise community awareness of the textile arts. The Guild includes weavers, spinners, knitters, basket makers, and others interested in the textile arts. Members draw inspiration from the Southwest landscape and the environment in which they live.

Weaving is acknowledged as one of the oldest surviving crafts in the world. Ancient Puebloan peoples used finger techniques to weave sophisticated textiles from wild plants and animal fibers. They were also growers and weavers of cotton and wool (after the Spanish introduction of sheep). The Navajo, Spaniards, and later-day European settlers developed their own unique practices, contributing to the rich mix of New Mexico textile traditions. 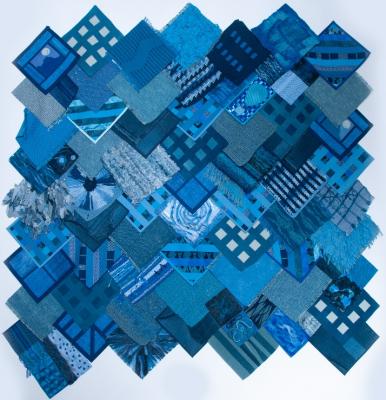