(Santa Fe, New Mexico) - The New Mexico Department of Cultural Affairs is pleased to announce that Billy Garrett has been appointed Executive Director of the New Mexico History Museum. He previously served as the museum’s interim director since May 2019.

“The New Mexico History Museum is one of Santa Fe’s most valued cultural treasures and an important resource for all New Mexicans,” said Garrett. “Building on this tradition offers wonderful opportunities for collaboration between museum staff, our supporters, and communities across the state. Over the next three years, the Campaign for New Mexico History is going to generate the essential funding needed for new exhibitions, work on the Palace of the Governors, and expansion of public programs. I’m honored to have been selected as Executive Director as we begin this exciting and important work.”

Much of Garrett’s work experience has focused on management of cultural resources, environmental design, community planning, and organizational management. He spent 26 years working for the National Park Service, where he developed a strong background as a manager and architect, with significant experience with historic structures. He’ll use this experience to build capacity in the museum, strengthen communications and relationships with the public, and ensure the relevance of programs to communities throughout New Mexico.

“We are thrilled to welcome Billy as the Executive Director of the New Mexico History Museum,” stated Debra Garcia y Griego, Cabinet Secretary for the New Mexico Department of Cultural Affairs. “During his nine months as Interim Director, he has skillfully designed a long-range plan for the History Museum and the Palace of the Governors, positioning the recently-launched Campaign for New Mexico History for great success.”

A third-generation New Mexican, Garrett graduated from Las Cruces High School and later received a B.A. of Architecture and an M.A. in Anthropology from Arizona State University. Following his retirement from the National Park Service in 2009, he returned to Las Cruces and served as a Doña Ana County Commissioner from 2010-18.

At the National Park Service, he was a principal author of the NPS Guideline on Cultural Resource Management (NPS-28), led efforts to redefine the scope and purpose of Historic Structure Reports, and expanded the use of historic buildings for park housing on a system-wide basis. He also served as chief of operations at Gateway National Recreation Area from 2005-09, directing the work of more than 300 employees through multiple supervisors and was responsible for annual budgets of approximately $35 million. 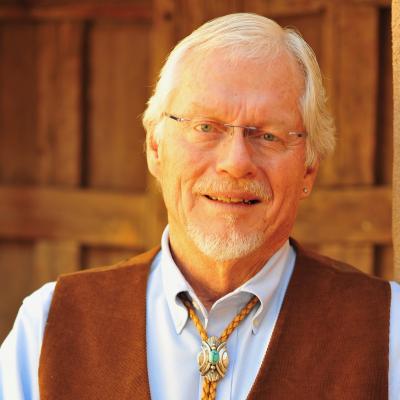