SANTA FE, N.M. – The New Mexico Department of Cultural Affairs (DCA) today announced that Mark A. White has been named executive director of the New Mexico Museum of Art. He is expected to begin on May 18, 2020.

“In the midst of these trying times, we are grateful to have Mark appointed as Executive Director of the New Mexico Museum of Art, ensuring solid leadership of the institution when our museums reopen to the public,” stated Debra Garcia y Griego, Cabinet Secretary for the New Mexico Department of Cultural Affairs. “Mr. White and the Department officially agreed to an offer the first week of March. Due to concerns surrounding the novel coronavirus outbreak, a decision was made to delay the announcement. Our primary concern was closing museums to protect the health and safety of New Mexicans and to get our workforce home and working remotely.”

As executive director at the New Mexico Museum of Art, White will work within the DCA Arts and Sciences Group and collaborate with other divisions within that unit, as well as support initiatives with the DCA History and Heritage Group and other divisions within the department. He will manage a museum staff of about 30, including curators, educators, librarians, public relations and special events staff, technicians, facility managers, and security personnel. He was selected from an initial pool of about 40 applicants.

Founded in 1917, the New Mexico Museum of Art contains more than 20,000 works of American and European art, including paintings, prints, drawings, sculpture, photographs, new media, and conceptual works. The focus of the collection is on American art with an emphasis on artists working in the Southwest.

"I’m deeply honored to have been selected as the next executive director of the New Mexico Museum of Art,” said White. “The museum has a rich and storied history, a remarkable permanent collection, and a fantastic record of engaging exhibitions and programs. I look forward to working with the museum’s staff and audience and to serving the residents of New Mexico as a steward of one of their most important cultural treasures."

White previously spent the past 11 years at the Fred J. Jones Museum of Art at the University of Oklahoma in Norman, Okla., including as Wylodean and Bill Saxon Director since 2015. He also served as the museum’s Eugene B. Adkins Curator of numerous selected collections, including the James Bialac Native American Art Collection.

As director of the Fred J. Jones Museum of Art, White spearheaded many prominent projects during his tenure, including over $4 million raised in programming and collection support, securing Robert Indiana’s "LOVE" sculpture for the university’s campus, and the curation of several highly attended exhibitions at the museum.

White, who spent eight years teaching art history at Oklahoma State University, earned his doctoral degree in art history at the University of Kansas, where he was a recipient of the Henry Luce Foundation Dissertation Award. His major area of study was 20th century American painting and sculpture, and his minor areas of study were Native American art and material culture and 16th century Venetian painting. He also possesses Bachelor of Arts and Master of Arts degrees in art history.

A native of the Sooner State, White has been a frequent visitor to Santa Fe and other areas of New Mexico. 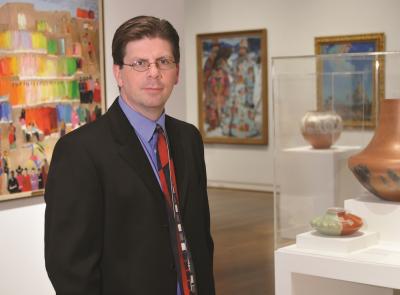