The Museum of International Folk Art (MOIFA) is excited to present a virtual “charla” (chat) with filmmaker Cody Edison on his award-winning film “And Those Who Dance it Surrender Their Hearts to Each Other” at 2 p.m. on Wednesday, March 24. The documentary focuses on the northern New Mexico string band Lone Piñon as the group pays homage to the region’s cultural roots. Edison and two members of the band, Jordan Wax and Tanya Nuñez, will share their stories and answer questions during the charla.

Winner for Best Documentary Feature at the Cinema on the Bayou Film Festival, the 43-minute documentary will be available for viewing via MOIFA’s YouTube channel at 2 p.m. on Sunday, March 21, and at 2 p.m. on Monday, March 22, on the museum’s Facebook page. This is to allow ample time for viewers to enjoy at their leisure.

All times listed are MDT.

After registering, you will receive a confirmation email containing information about joining the meeting.

Cody Edison grew up in Idaho and he currently resides in Los Angeles, California. In 2012, he received his BFA in photography and media from California Institute of the Arts (CalArts). The discovery of Harry Smith’s Anthology of American Folk Music became both a cultural gold mine and practical one. Edison co-produced Re-Envisioning America (2010-2012), a multi-media homage to the Anthology with colleagues at CalArts. These productions were widely hailed as among the most significant tributes to American music that the CalArts community had ever seen or heard. Following the success of this project, Edison became dedicated to filming performances of regional roots musicians who are renewing and preserving folk traditions in North America. And Those Who Dance it Surrender Their Hearts to Each Other (2018) received the Best Documentary Feature Award from the Cinema on the Bayou Film Festival in Louisiana. It has screened in Mexico, Canada, and widely throughout the United States. In 2021, the film was added to the permanent collections of the Museum of International Folk Art in Santa Fe, New Mexico, and the Library of Congress (American Folklife Center) in Washington, D.C.

Jordan Wax (violin, piano- and three-row accordions, mandolin, guitar, vocals) grew up in Missouri and was traditionally trained by master Ozark fiddler Fred Stoneking and central Missouri dance fiddler John White.  He worked as bandleader and accordionist for a Yiddish dance band for years before his work with Missouri and New Mexican fiddle styles inspired him to travel to Mexico for a 6-month immersion in Mexican huapango fiddling, where he learned from Rolando "El Quecho" Hernández of Trio Chicontepec, Casimiro Granillo of Trio Chicamole, and a variety of local fiddlers in the Huasteca region of San Luis Potosí.  His studies of traditional New Mexico dance music have been guided and inspired in the past years by Tomas Maes (mandolinist of Santa Fe) and Antonia Apodaca (accordionist and guitarist of Rociada, N.M.). In 2018 he traveled to Morelia in the Mexican state of Michoacán for a few weeks of intensive study with master son calentano violinist Serafin Ibarra Cortez and P’urepecha elder and composer Tata Pedro Dimas.

Tanya Nuñez (upright bass, guitar, vocals) was born in southern New Mexico. Growing up in a musical family, no celebration was complete without music and dance: rancheras, polkas, valses, and cumbias. She has worked as a bassist in a variety of traditions from classical, tango, Persian, and Arabic, to country, rock, and funk/soul. Though she plays many styles, the beautiful and diverse music of the Southwest and Mexico holds a special place in her heart and she is honored to study and share it. 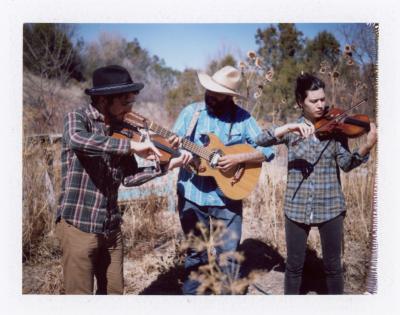