Scientists at the New Mexico Museum of Natural History & Science (NMMNHS) and other institutions have announced a newly described horned dinosaur first discovered near Cuba, New Mexico, and roamed the area 82 million years ago as one of the earliest ceratopsid species, a group known as horned or frilled dinosaurs. Researchers published their find in the journal PalZ (Paläontologische Zeitschrift).

Menefeeceratops sealeyi adds important information to scientists’ understanding of the evolution of ceratopsid dinosaurs. In particular, the discovery sheds light on the centrosaurine subfamily of horned dinosaurs, of which Menefeeceratops is believed to be the oldest member. Its remains offer a clearer picture of the group’s evolutionary path before it went extinct at the end of the Cretaceous.

The fossil specimen of the new species, which included multiple bones from one individual, was originally discovered in 1996 by Paul Sealey, a research associate at NMMNHS, in Cretaceous rocks of the Menefee Formation. A field crew from the Museum collected the specimen, and Tom Williamson of NMMNHS briefly described it the following year. Since then, additional research on other ceratopsid dinosaurs and further preparation of the specimen itself have shed new light on the fossils.

Based on the latest investigations, researchers determined the fossils represent a new species. The genus name Menefeeceratops refers to the rock formation in which it was discovered, the Menefee Formation, and to the group of which the species is a part, Ceratopsidae. The species name sealeyi honors Sealey, who unearthed the specimen.

Horned dinosaurs were generally large, rhinoceros-like herbivores that likely lived in groups or herds. They were significant members of Late Cretaceous ecosystems in North America.

Although bones of the entire dinosaur were not recovered, a significant amount of the skeleton was preserved, including parts of the skull and lower jaws, forearm, hindlimbs, pelvis, vertebrae, and ribs. These bones not only show the animal is unique among known dinosaur species but also provide additional clues to its life history. For example, the fossils show evidence of a potential pathology, resulting from a minor injury or disease, on at least one of the vertebrae near the base of the spinal column.

Some of the key features that distinguish Menefeeceratops from other horned dinosaurs involve the bone that makes up the sides of the dinosaur’s frill, known as the squamosal. While less ornate than those of some other ceratopsids, Menefeeceratops’ squamosal has a distinct pattern of concave and convex parts.

Menefeeceratops was part of an ancient ecosystem with numerous other dinosaurs, including the recently recognized nodosaurid ankylosaur Invictarx and the tyrannosaurid Dynamoterror, as well as hadrosaurids and dromaeosaurids.

While relatively less work has been done collecting dinosaurs in the Menefee Formation to date, the researchers hope that more field work and collecting in these areas, together with new analyses, will turn up more fossils of Menefeeceratops and ensure a better understanding of the ancient ecosystem of which it was part.

"Menefeeceratops shows us just how much we still have to learn about the horned dinosaurs of western North America,” said Lucas. “The oldest centrosaur, Menefeeceratops indicates that the Southwest region of the United States was an important place in the evolution of the centrosaurs. And, the recognition of this new centrosaur adds to a growing diversity of centrosaurs, and thus provides impetus to further efforts to discover fossils of these kinds of dinosaurs." 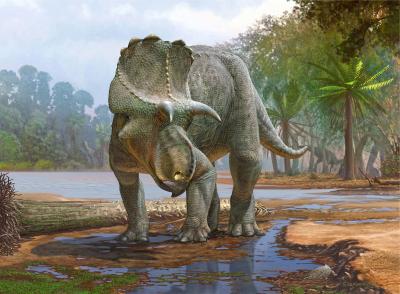 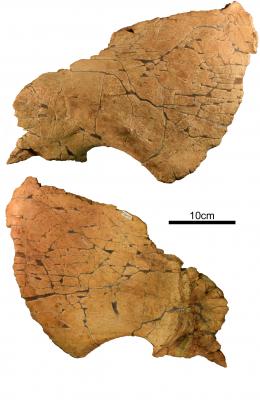