A couple of notable decorative doors on the eastern side of the Storehouse at Los Luceros Historic Site could soon get a much-needed makeover.

In the fall of 2020, the historic state property, part of the New Mexico Hisitoric Sites system, received a Save America’s Treasures grant in the amount of $451,252 from the National Park Service to address preservation needs and increase accessibility to the two-story adobe Hacienda and adjacent one-story adobe Storehouse at the site. While the initial phase of this structural care project involves an assessment of the buildings and architectural components, the staff at the historic state property has been working with local object conservator Rae Beaubien, who has completed an initial evaluation of the two folk art-style doors of the Storehouse.

About $35,000 of the Save America’s Treasures grant has been allocated for the doors to be either restored, replicated, or both – a decision that will be made with the input of community stakeholders at a later date. The doors were likely brought to Los Luceros by Mary Cabot Wheelwright in the early 20 century.

After Beaubien’s first assessment of these decorative doors, many insights into their construction and history have emerged. For instance, one of the doors (North Door) was believed to have been originally created in the Truchas area during the late 1800s, and the other door (South Door) built during the 1930s. However, the material used to create the supposed older door suggests a more recent fabrication.

The most surprising detail was that the North Door has very little unique craftmanship in its design. Most of the wooden elements were wooden block shapes commonly found in hardware stores and were most likely not handcrafted for this specific door. The South Door has more unique elements with all of the circle designs on the door but this door is less robust and of a flimsier base.

"My condition assessment of these two charming doors gave me an intriguing glimpse of how each of them was made, revealing some notable differences in overall structure, how the decorative details were assembled, and how these differences account for condition issues that will need to be addressed during conservation,” said Beaubien.

The preservation of the doors is expected to be an extensive process and involve multiple steps. With the first assessment finished, the physical conservation work will begin as soon as a decision is made on the course of action for the doors.

“This project means that we will be able to continue preserving Los Luceros for future generations, and the work done will help us answer many questions about the site’s architectural history,” said Ethan Ortega, site manager at Los Luceros Historic Site.

The total cost of the preservation projects at Los Luceros Historic Site is $1.1 million. This amount includes funding from the Save America’s Treasures grant and matching funds provided by the New Mexico Department of Cultural Affairs.

Los Luceros Historic Site Ranger Rebecca Ward will document the work of the preservation projects in a blog titled “Adobe Speaks,” which can be read at http://nmhistoricsites.org/los-luceros/blog. 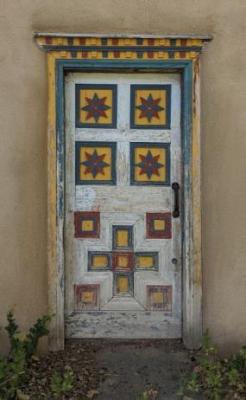 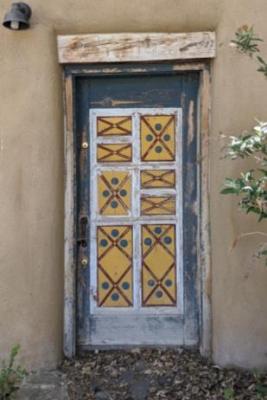