SANTA FE – Since 1931, the New Mexico Historic Sites system has welcomed visitors to explore the state’s past by following in the footsteps of Indigenous people, Spanish conquistadors, Civil War soldiers, outlaws, and lawmen. Each historic site offers unique learning experiences, and in order to continue providing these programs and resources the cost of admission will increase at many sites on Thursday, July 1.

“Over the past several years, the staff at New Mexico Historic Sites have developed innovative and dynamic ways of presenting our state’s remarkable history,” said Patrick Moore, executive director of New Mexico Historic Sites. “By bringing our admission rates into balance with the other world-class museums within the New Mexico Department of Cultural Affairs, we can further expand on these accomplishments and support the many new and engaging programs and exhibits we are developing for our guests.”

Entrance fees at Lincoln, Jemez, and Coronado historic sites will see a nominal increase from $5 to $7. Los Luceros, Fort Stanton, and Bosque Redondo Memorial/Fort Sumner historic sites, all with major physical improvements underway, will begin charging in line with the rest of the sites ($7). Admission at Fort Selden Historic Site will remain $5.

Below are examples of new and upcoming programs and other offerings that visitors can enjoy across New Mexico Historic Sites.

Bosque Redondo Memorial/Fort Sumner Historic Site will host the soft opening of the new exhibit “Bosque Redondo: A Place of Suffering…A Place of Survival” on July 1. In the Summer of 1990, a letter left by 17 Diné (Navajo) students at the Fort Sumner Historic Site Navajo Traveler Shrine, requested that the true history of the Navajo Long Walk be told through the site’s interpretation. This exhibition was designed through a partnership with the Navajo Nation and the Mescalero Apache Tribe. For the first time, this exhibit interpretation features voices from the communities most affected by this history in the form of oral histories (in English, Diné, and Ndé), contemporary quotes, and imagery to explain what life was like before, during, and after the Bosque Redondo Indian Reservation system.

“A Place of Suffering…A Place of Survival” uniquely incorporates the outside world to the inside gallery through the use of skylights and fiber optic light bundles. There are more than 10,000 light bundles, illuminated by natural light. Each bundle represents one Diné or Ndé individual who was forced to march to the Bosque Redondo Indian Reservation. The exhibition also features state-of-the-art digital interactives including a Treaty of 1868 touchscreen to allow visitors to hear each page in the Diné language or explore how each article affected the Diné later in life, and another interactive that features a reflection touchscreen to engage audiences and to create a space where community feedback is directly included in the exhibition.

Beginning July 4, Los Luceros Historic Site will extend its hours from sunrise to sunset on the first Sunday of each month. During this time, entrance into Los Luceros will be free for New Mexico residents and includes access to the site’s visitor center, historic buildings, trails, and picnic areas. The early morning and late evening are ideal for bird watching at Los Luceros, which boasts a large diversity of species including bald eagles, hummingbirds, migratory waterfowl, as well as one of the largest concentrations of flicker woodpeckers in New Mexico. Also, the edge of the Rio Grande on the property at sunset is an ideal location to view bats beginning their nightly feast. The extended hours are also a great opportunity for visual artists to capture more of the natural beauty of Los Luceros.

Fort Stanton Historic Site will soon celebrate its 14th anniversary as a state historic site, during which time the State Legislature has allocated hundreds of thousands of dollars to preserve the 240-acre property. At Fort Stanton, visitors can walk in the footsteps of notable figures such as Kit Carson, John “Black Jack” Pershing, New Mexico’s Buffalo Soldiers, tuberculosis-era medical staff and patients, and others. Also, beginning on July 1, visitors to the area may purchase $10 shared tickets, which grants access to both Fort Stanton and nearby Lincoln Historic Site.

Lincoln features the permanent exhibit, “Voices from the Past: The Story of Lincoln.” At the historic site, visitors have access to six buildings and museums, including the historic Lincoln County Courthouse, where Billy the Kid made his famous escape 140 years ago.

Jemez Historic Site, located north of the village of Jemez Springs, offers year-round opportunities to learn about the culture and history of the Jemez people. Established to preserve the 14th century ruins of Giusewa Pueblo and the 17th century ruins of San Jose de los Jemez Mission, the site boasts a museum and interpretative trail. Through self-guided tours, visitors can learn not only about the Jemez People, but also the Franciscan missionaries who came to New Mexico to convert the local population to Catholicism.

At Coronado Historic Site, situated among the ruins of Kuaua Pueblo, visitors can view the original murals drawn by the people of Kuaua Pueblo in the 15th and 16th centuries. These images depict the religious and everyday life in the village, as well as representations of the natural wildlife.

Coronado, located near the town of Bernalillo, offers ramada-covered picnic tables with unobstructed views of the Rio Grande and Sandia Mountains. Visitors can enjoy the history and beauty of northern New Mexico along with many other attractions along El Camino Real National Historic Trail and/or Jemez Mountain Trail National Scenic Byways. 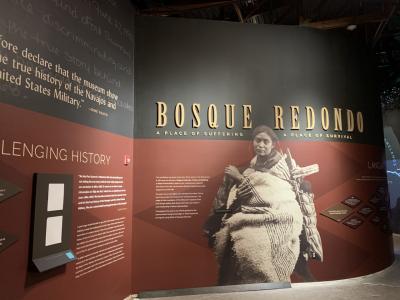