ALBUQUERQUE – Throughout human history, honey bees have come to symbolize hard work, community, politics, and faith. This important eusocial flying insect is presented in the exhibit “What’s the Buzz? Why Honey Bees Matter,” opening on July 23 at the New Mexico Museum of Natural History & Science.

“What’s the Buzz?” takes a closer look at bees in culture and religion, their migration history, the physiology and anatomy of bees, and the future of honey bees and their connection to agriculture.

The exhibit explores how humans for thousands of years have kept honey bees for food and other bee products. For instance, early humans mastered not only the ability to hunt for honey in natural beehives, but they also maintained their own colonies of honey bees for reliable supplies of honey and beeswax.

“What’s the Buzz?” also examines the critical role bees play in the growing of crops, pollinating about a third of the plants that produce food for human consumption, including nuts, melons, and fruits, and how a shortage of bees threatens that vital role. A series of large-scale disappearances of honey bees have occurred during the past 15 years due to a phenomenon known as colony collapse disorder; for example, from April 2014 to April 2015 commercial beekeepers in the United States lost a staggering 42% of their bees.

Within the exhibit, activities for visitors of all ages include the waggle dance (a communication technique for bees), puzzles on bee body types, and a video that uses motion graphics to explain pollination. 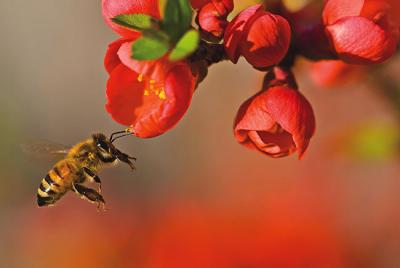