MIAC Announces Opening of “Birds: Spiritual Messengers of the Skies”


Birds are one of the earth’s greatest treasures. Acting as spiritual messengers between sky and earth, they have been held in the highest regard in Native American culture, both in the past and in the present. The Museum of Indian Arts and Culture (MIAC) is excited to announce the opening of “Birds: Spiritual Messengers of the Skies.” Beginning September 18, 2021, and on display in MIAC Laboratory of Anthropology, this temporary exhibition explores the role of birds in Native American culture of the Southwest and beyond.

“Birds are essential in keeping down insect populations, pollinating plants, and dispersing and recycling nutrients back into the earth, but beyond their practical contributions, birds are also inspirational creatures that encourage and feed our spirits,” said Diana Sherman, collections manager, and exhibit curator. “This exhibit celebrates the greatness of birds in our world and their important role in Native American culture. Representations of birds are abundant on pottery and in rock art, speaking to the important role they played in the past and today.”

The exhibition looks at the roles our flying companions play by exploring the use of birds in daily life and their representation on pottery and in rock art. Whether through paintings on vessels or vessels shaped in the form of birds, there is no doubt that these creatures have been admired for ages. Giving lifesaving feathers, sometimes serving as a food source, and serving in the spiritual realm, birds have played a crucial role in the celebration and preservation of life. 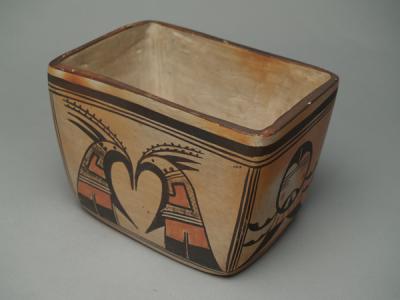