Textiles on the Bosque Redondo Indian Reservation - R.B. Burnham & Company to hold art and rug auction on May 28

Fort Sumner, NM - As part of the grand opening of Bosque Redondo Memorial’s permanent exhibition “A Place of Suffering…A Place of Survival” on May 28, R.B. Burnham & Company will be hosting one of their Native American art and rug auction. They are a trading company situated in Sanders, Arizona, a small reservation border town. 25 to 30 rugs will be made available through the auction, as well as baskets, jewelry, and pottery. The auction begins at 3:00 pm, but visitors will be able to view auction items throughout the day alongside the rest of the day’s events.

The story of Bosque Redondo means a lot to Bruce and Virginia Burnham, the owners of R.B. Burnham & Company. They held an auction during the original grand opening of Bosque Redondo Memorial in 2005. “We’re dedicated to the site,” Mr. Burnham said. “We want to do what we can to support the place and the people.” Their family has also served the Native people of the Four Corners area for five generations and are dedicated to innovation and quality in Diné textiles.

R.B. Burnhamn & Company was responsible for the renaissance of the Germantown rug, a Diné style of weaving that originated on the Bosque Redondo Indian Reservation. They found and worked with a few textile mills willing to produce the colorful, three-ply yarn necessary to produce rugs in the style for some time, though they currently no longer have any Germantown style rugs and have had difficulty securing more of the yarn.

To stay warm on the harsh land, the Diné weavers on the Bosque Redondo Indian Reservation made wearing blankets, not the kinds of rugs we are familiar with today. The Germantown color and design were distinctive but so was the process of producing them: the weavers attached the fringe last, ensuring that, should the fringe become worn, the structure of the blanket would remain strong. The style emerged from the difficult circumstances the Diné and Ndé were forced to live under on the Reservation, the cold, the lack of food, and the upheaval of being forced from their lands. The soldiers at Fort Sumner brought colorful yarns from Germantown, a suburb of Philadelphia, for the weavers to work with. When the style fell out of favor in the early 1900s, its signature three-ply yarns also became more difficult to source, making the Burnhams’ efforts to revive the style all the more notable.

The Bosque Redondo Memorial at Fort Sumner Historic Site delivers visitors into the heart of history and tragedy. In 1863, some 10,000 Navajos were forced to make the “Long Walk,” 450 miles across New Mexico to the Bosque Redondo Indian Reservation, or H’weeldi, meaning place of suffering. Hundreds of Ndé were also interned there. Bosque Redondo Memorial was created in 2005 and revitalized in 2021 with strong support from the Diné and Ndé, and designed by Diné architect David Sloan in the shape of a hogan and tepee. The permanent interpretive exhibition features evolving interactives, an interpretive trail, and programs for visitors. 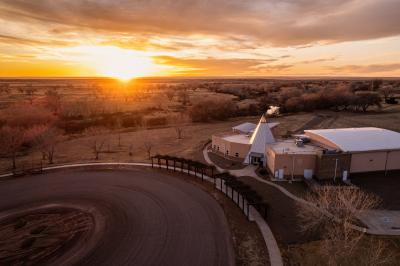