(Santa Fe, NM May 3, 2011)—Macedonian ethnic dress has it all – it is full of meaning and significance, visually stunning, quite possibly overwhelming, and embodies the skill, expectations, hopes and fears, creative use of materials, and aesthetic sense of the individuals who made and wore it. Saturated with cultural meaning, these many-layered ensembles rank among the best examples of textile art anywhere. For more than fifty years the Museum of International Folk Art has been assembling a collection of Macedonian dress worn by Orthodox Christian villagers from 1890 - 1950. The collection tripled in size in 2010 with a large donation through the efforts of the Macedonian Arts Council.

Focusing on the rich textile tradition of the Republic of Macedonia, this ground breaking exhibition will show twenty-seven mannequins dressed in multiple layers including jewelry, as well as single garments, highlighting the cultural significance of making and wearing clothes. The visual system of meaning created by Macedonian women living in villages indicated to a knowing eye where the wearer of a particular costume was in the cycle of life. From puberty through betrothal, marriage, child bearing, and old age, dress changed to reflect status change. Historic ensembles, no longer made but preserved in the Museum, also illustrate the tumultuous political history of the region; pan-Slavic, Byzantine, and Ottoman influences can be seen in embroidered motifs, materials, garments, and jewelry.

Young Brides, Old Treasures comes from a poem by Aco Shopov titled I Buy Old Things. Macedonian costume is recognized for its intricate embroidery (the more decorated the higher the wearer’s status) and blazing red color derived from madder until the late-nineteenth century. Most clothing was made from wool, linen, and cotton that was raised and processed at home. Silk worms were reared in some areas while silk thread for embroidery was purchased in others. Quantities of silver-gilt thread were used to decorate wedding garments. A young woman was expected to produce her wedding ensemble before she was eligible to marry. In order to achieve this, she had to master spinning, weaving, and many types of embroidery.

The most ancient element of Macedonian women’s dress, the long shirt-like chemise that is thought to have survived from the ancient Slavs, became a canvas of culture. Certain stitches, motifs, color combinations, and placement of embroidery became associated with specific groups in a process that might be called cultural selection. One village cluster chose red and orange-dyed wool for embroidery while another preferred dark blue. One group might have developed a particular embroidery stitch that differed from the stitches used by their neighbors. Over time, these choices coalesced into recognizable styles associated with an ethnic group or village location—choices that became visible cultural signifiers. A sense of congruence and ownership grew between the maker and her creation. The formalizing of these choices resulted in a kind of boundary—this is ours and not yours; we are us and not you—that also served to identify a person as insider or outsider—an unspoken language of society.

The exhibition will be accompanied by a catalog, of the same name, that includes essays written by leading Macedonian scholars and extensive photographs of the museum’s collection, the largest and most comprehensive in the United States. 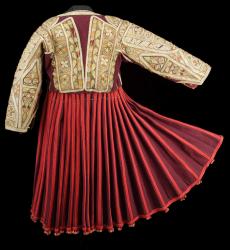 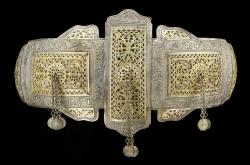 Back View Of New Bride’s Dress 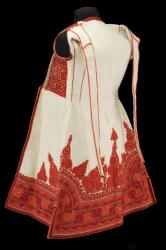 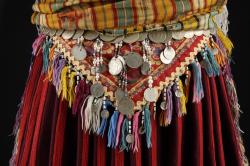