Encore: Schola Cantorum and the Monks of Christ in the Desert Monastery

Last December, a performance by Santa Fe’s Schola Cantorum and the monks of Christ in the Desert Monastery drew an overflow crowd to the New Mexico History Museum. So many people were turned away that the singers graciously offered an impromptu, after-show performance in the museum lobby. Impressed by the turnout, as well as the unexpectedly fine acoustics of the lobby, the singers eagerly offered to return for an encore performance.

At 2 pm on Sunday, March 11, come to the museum lobby for a soulful afternoon featuring Holy Week chants of 10th-century Europe, polyphony of the 16th-century Renaissance and, in honor of St. Patrick’s Day, chants from Ireland’s Dublin Troper, published in 1360.

The event, part of the programming series for the exhibits Illuminating the Word: The Saint John’s Bible and Contemplative Landscape, is free with admission; Sundays are free to NM residents.

Founded in 1990, Schola Cantorum has shared the sounds of sacred music masterpieces in the Santa Fe area, the Basilica of San Albino in Mesilla, NM, Sacred Heart Cathedral in Pueblo, Colo., and Saint Mary Cathedral in Colorado Springs, Colo. Its director, Dr. Billy Turney travels to the Monastery of Christ in the Desert near Abiquiu on a regular basis to give lessons in vocal technique and organ for the singing and accompanying of Gregorian chant.

The monks have recorded three albums of chants. The latest, Blessings, Peace and Harmony, will be released on April 24, 2012, as their Sony Masterworks debut album.

Download a high-resolution image of the two groups by clicking on "Go to related media" at the top left of this page. 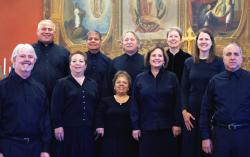 Schola Cantorum and the Monks of Christ in the Desert Monastery