The New Mexico Museum of Art partners again this year exhibiting the winners of CENTER’s  annual Project Competition and Project Launch. The exhibition opens May 25 and runs through August 26, 2012.

“The repopulation of Nagorno-Karabakh (a de facto independent republic in the South Caucasus) is something everyone I met felt passionately about and the women were proud to be doing their part for this hopeful state,” the artist writes in her statement about the series. But, she adds, there are unanswered questions about the long-term effects of this national policy. “In a region as economically deprived as Nagorno Karabakh, is the solution simply to increase the birth rate, without first improving education, infrastructure, employment opportunities and raising the standard of living for these future generations?”

Taylor-Lind is a British photojournalist based in the Middle East, part of the VII Agency’s mentor program. Her project was selected by an eminent trio of jurors: Greg Hobson, Curator of Photographs at the National Media Museum in Bradford, England; Paul Moakley, Deputy Photo Editor at TIME magazine; and Christopher Steighner, Senior Editor at Rizzoli Publications, Inc. The jurors reviewed work from thirty-four countries. They also awarded three Juror’s Choice awards and three Honorable Mention awards; work by these winners will be shown on a flat-screen monitor in the exhibition: Pablo Martinez, Scott Conarroe, Stijn & Marie, Alejandro Cartagena, Peter van Agtmael, and Thilde Jensen.

Odette England’s Project Launch series Thrice Upon a Time is a collaborative undertaking with her parents. When they revisit the family dairy farm in South Australia—lost to them for financial reasons—they wear photographic negatives on the soles of their shoes. These negatives of family snapshots made by the artist at the farm are trod upon by her parents as they walk around the farm. The damaged negatives are then returned to the artist to reconstruct and print. “I am simultaneously remembering, depicting, and fabricating a fantasy,” the artist says of this series.

England is an Australian-born photographer completing her M.F.A. degree at the Rhode Island School of Design. She was named the Magenta Foundation Flash Forward Emerging Photographer in 2009 and again in 2010 when she also received the HotShoe Photofusion Award and second prize in the Px3 Prix de la Photographie.

England’s work was selected among the Project Launch submissions by Virginia Heckert, Associate Curator of Photographs at the J. Paul Getty Museum. Heckert also designated two Honorable Mention awards; work by these winners will be shown on a flat-screen monitor in the exhibition: Yiorgos Kordakis and Donna Wan.

This exhibition is made possible through the generosity of donors to the New Mexico Museum of Art Director's Leadership Fund and Exhibitions Development Fund and the Mad Framer, Santa Fe. 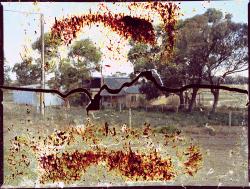 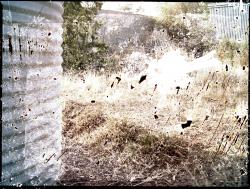