The Art of Gaman

The Art of Gaman: Arts and Crafts from the Japanese American Internment Camps, 1942-1946

The Art of Gaman reflects the strength of Japanese American character in the face of humiliating internment through nearly 100 objects created during World War II. The exhibition opens at the Museum of International Folk Art July 8, 2012 and runs through October 7, 2012.

Soon after the bombing of Pearl Harbor in December 1941, 120,000 ethnic Japanese on the West Coast—more than two-thirds of whom were American citizens by birth—were forced to leave their homes and move to internment camps for the duration of the war.

In these bleak camps, the internees used scraps and other found materials to make utilitarian objects and decorative art to beautify their surroundings. Nothing was viewed as waste—waxy string from onion sacks was unraveled and woven into baskets, old toothbrush handles were turned into pendants, gallon-sized glass mayonnaise jars became miniature display cases for fragile pieces of art, tin cans were converted into toy trains, produce crates were chopped into blocks and carved into bird pins. And since metal objects for carving, cutting, and more could not be brought into camp, they were fashioned from sharpened butter knives and discarded metal. The internees resourcefulness is further evidenced by their having created sandpaper by gluing crushed glass onto pieces of cardboard.

These arts and crafts became essential for simple comforts and emotional survival. These tools, teapots, furniture, toys and games, pendants and pins, purses and paintings—are physical manifestations of gaman, a Japanese word that means to bear the seemingly unbearable with dignity and patience.

It is a wonder these objects of beauty survived. Their creators tended not to think of what they produced as “art,” nor themselves as artists (since few had any formal training other than what they received in the camps from other internees). And many threw away their handicrafts viewing them as nothing more than painful reminders of a time they wished to forget. Objects included in the exhibition represent stories of perseverance, from the small bird pin that belonged to Hirasuna’s mother that was the starting point for the exhibition.

“The Art of Gaman, highlighting art created by Japanese internees during World War II, will take place in the museum’s Gallery of Conscience, where such issues as war, ecological and political disruptions, and various economic and social concerns impact the creative spirit and the traditional arts are examined,” said Marsha Bol, museum director.

“This exhibition provides an amazing opportunity to put a human face on the internees who were literally reduced to a serial number while held behind barbed wire fences during World War II,” said Hirasuna. “The objects they made in camp represent a triumph of the human spirit over adversity. We can’t help looking at these beautiful things and thinking of the individuals who made them.”

Most of the objects in the exhibition are on loan from former internees or their families. Historical context is provided through archival photographs, artifacts, and documentary films. The exhibition is organized by San Francisco-based author and curator Delphine Hirasuna with advisory support from the Smithsonian American Art Museum, and is based on her 2005 book;  The Art of Gaman, published by Ten Speed Press.

The Art of Gaman opens at the Museum of International Folk Art on Sunday July 8, 2012 with a lecture by Delphine Hirasuna. The exhibition closes October 7, 2012.

ManyMountains.org (a Web site devoted to preserving the memory of the Santa Fe internees) 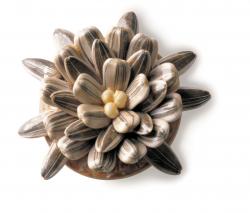 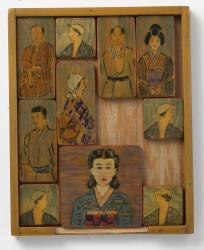 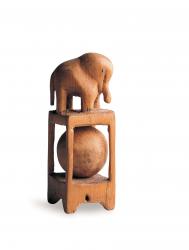 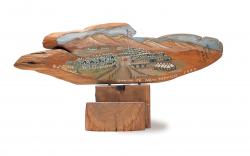 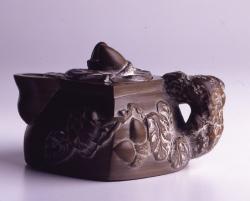