Paper Trail: How the West is One, Too


New Mexico Museum of Art Paper Trail: How the West Is One, Too

Santa Fe—The reinstallation of the New Mexico Museum of Art collection in 2007 offered an opportunity to display the history of New Mexico art in a contemporary way. How the West Is One created a single chronology composed of Native American, Hispanic, and European American art. However, because this is a long term exhibition, the display could not include works on paper.

Paper Trail: How the West Is One, Too displays photographs, drawings, and prints to expand the original presentation. The exhibition opens on September 19, 2008 and runs through February 8, 2009.

Often the pairs of objects strongly contrast with each other. For example, Jaune Quick-to-See Smith’s Paper Dolls for a Post Colonial World and Bruce Nauman’s Live or Die (Red version) contrast the intersection of history and philosophy. Quick-to-See Smith’s paper doll costume comes from a series of works executed in 1993 to celebrate Christopher Columbus’ mis-discovery of America. Her series presents paper doll costumes that viewers can use to dress Indians for new roles in mainstream society.

However this particular outfit alludes to the clothing sent to Native peoples during the nineteenth century—clothing that was infected with small pox and caused genocide among many tribes. Internationally-known conceptual artist Bruce Nauman implores viewers to “live of die.” In the context of Quick-to-See Smith’s series of paper dolls, however, this dictum makes little sense.

Not all of the pairs are contemporary. Willard Metcalf’s Dance of the Great Knife and Charles F. Lummis’ Dance Pueblo of Santa Clara, N.M. contrast the relationships between painting and photography. Shortly after railroads arrived in the state during the 1880s, European American artists and anthropologists flocked to New Mexico to record aspects of indigenous lifeways that they believed, incorrectly, would soon disappear. Outsiders were particularly interested in the religious activities of Pueblo Indians.

Willard Metcalf’s monochromatic painting was based on photographs taken by John K. Hillers at Zuni Pueblo in 1879-80. He freely eliminated details from his photographic sources, such as the presence of the ethnologist Frank Cushing who was standing in the lower right corner. This painting was the source for a wood engraved illustration that accompanied Cushing narrative “My Adventures In Zuni” published by Century Magazine in 1882-3.

At first Charles F. Lummis’s photograph looks like many other dance photographs from the end of the nineteenth century. However, viewers are surprised with the large numbers of European American visitors, and the small number of Pueblo observers. The dark forms in the background provide the keys to the image; they are coaches stopped on the narrow gauge tracks behind the Pueblo. Apparently, this is an early photograph of a special tourist coach that brought tourists to the Pueblo to observe a staged Pueblo ritual.

Joseph Traugott, Curator of Twentieth century Art at the New Mexico Museum of Art curated Paper Trail: How the West Is One, Too.

The exhibition opening on September 19, 2008 is free to the public and a reception hosted by the Women’s Board of the Museum of New Mexico will be held from 5:30 to 7:30 p.m.

### The New Mexico Museum of Art was founded in 1917 as the Art Gallery of the Museum of New Mexico. Housed in a spectacular Pueblo Revival building designed by I. H. and William M. Rapp, it was based on their New Mexico building at the Panama-California Exposition (1915). The museum's architecture inaugurated what has come to be known as "Santa Fe Style." For almost 100 years, the Museum has celebrated the diversity of the visual arts and the legacy of New Mexico as a cultural crossroads by collecting and exhibiting work by leading artists from New Mexico and elsewhere. This tradition continues today with a wide-array of exhibitions with work from the world’s leading artists. The New Mexico Museum of Art brings the art of New Mexico to the world and the art of the world to New Mexico. 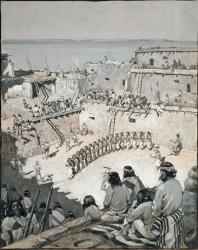 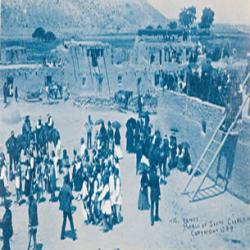