In March of 2012, the Museum launched the Alcove 12.0 series—nine exhibitions focusing on new work by contemporary New Mexico artists curated by Merry Scully.

The Alcove 12.0 format dates to the 1917 founding of the New Mexico Museum of Art as the Art Gallery of the Museum of New Mexico. Small one-person exhibitions were held in the gallery alcoves through the 1950s, resuming in the mid-1980s, and again in the early 1990s.  Many of the artists’ works in those early exhibitions form the historical core of the museum’s collection. But at the time of their shows, they, too, were contemporary artists working in New Mexico.

After a fifteen-year hiatus, the Alcove exhibitions at the New Mexico Museum of Art returned—and with a very ambitious schedule: five new artists, every five weeks, for one year. These artist-centered showcases have featured new ideas, artists at all stages of their careers, and art being made in New Mexico right now.

Curator Merry Scully said of the series, “The state’s Centennial and the museum’s upcoming 100th anniversary started the conversation about bringing back the Alcove exhibitions. We conceived a series of exhibitions focused on artists currently working in New Mexico. Past Alcove exhibits have been grouped and curated along thematic constructs, but for Alcove 12.0 each artist’s space was conceived of individually. The exhibition is a hybrid of forty-five short, one-person exhibitions and a yearlong group exhibition with forty-five artists,” said Scully.  Another purpose of the Alcove series and its related programming was to “create a culture of exchange and conversation—to present less formal opportunities for dialogue with the artists and the community, and vice versa,” she added.

Artist from across the state—Hobbs to Abiquiu—and from all stages of their careers have been included in the series. Such internationally recognized artists as Harmony Hammond and Susan York exhibited works as well as emerging artists, including Michael Borowski and the collaborative SCUBA (Crockett Bodelson and Sandra Wang). The fast turnover and focus on what the artists are making at present resulted in many artists trying new things, and creating new works and installations specifically for their Alcove.

Museum Director Mary Kershaw is quick to point out that it would be difficult to undertake such an ambitious project outside of New Mexico. “It is hard to imagine a place, outside of the major metropolitan areas, where we could be certain to find forty-five talented artists who could sustain the ambition and energy of this yearlong project.  Indeed, our challenge was that we didn’t have enough time and space to show all the exciting work that is happening here and now.”

In addition to the artists included in the exhibitions, dozens more were considered, and many visits to galleries and artists’ studios took place over the course of the past year and a half.

Nearly one hundred years ago the New Mexico Museum of Art was built as part of a program to encourage artists to come live and work in New Mexico, and to this day the state continues to be a haven for serious working artists.

The question remains: how long will New Mexico’s art fans have to wait for history to repeat? Neither Mary Kershaw nor Merry Scully will let on.

Gallery Conversation with the Alcove 12.9 Artists

This last in the series of informal conversations with the artists exhibiting in the museum alcoves is a combination of exhibition walk-through and dialog with the artists. It is open to all, and all are encouraged to participate in the conversation.

The New Mexico Museum of Art, founded in 1917 as the Art Gallery of the Museum of New Mexico, is housed in a spectacular Pueblo Revival building designed by I. H. and William M. Rapp based on their New Mexico building at the Panama-California Exposition (1915). The museum’s architecture inaugurated what has come to be known as “Santa Fe Style.” For nearly 100 years, the Museum has celebrated the diversity of the visual arts and the legacy of New Mexico as a cultural crossroads by collecting and exhibiting work by leading artists from New Mexico and elsewhere. This tradition continues today with a wide-array of exhibitions with work from the world’s leading artists. The New Mexico Museum of Art brings the art of New Mexico to the world and the art of the world to New Mexico.

Wa-ho: The First Song After the Flood 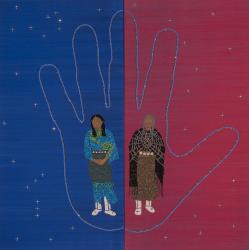 She Loved Her People 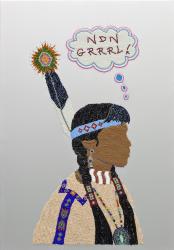