Turquoise, Water, Sky: The Stone and Its Meaning


Turquoise, Water, Sky: The Stone and Its Meaning, opening April 13, 2014 at the Museum of Indian Arts and Culture, highlights the Museum’s extensive collection of Southwestern turquoise jewelry and presents all aspects of the stone, from geology, mining and history, to questions of authenticity and value.

People in the Southwest have used turquoise for jewelry and ceremonial purposes and traded valuable stones both within and outside the region for over a thousand years. Turquoise, Water, Sky presents hundreds of necklaces, bracelets, belts, rings, earrings, silver boxes and other objects illustrating how the stone was used and its deep significance to the people of the region. This comprehensive consideration of the stone runs through May 2, 2016.

“Turquoise stands for water and for sky, for bountiful harvests, health and protection,” said Maxine McBrinn, Curator of Archaeology at the Museum of Indian Arts and Culture. “Blue-green symbolizes creation and the hope for security and beauty. These ideas were so important that if the stone was not available, its color was represented through other methods.”

The following are a few areas examined within the exhibition’s galleries:

Ancients to moderns have sought to capture the color of turquoise. And in some cases, the color meant more than the material.

Wooden pendants dating to 1200 AD were covered with green malachite paint. Anasazi pottery, decorated with parallel, diagonal lines, told the viewer to imagine blue-green where there was none. To improve the stone’s blue quality, Navajos soaked it in sheep’s tallow.

By the 1920s, demand for the stone outpaced supply. Hubbell Trading Post met the high demand among tourists discovering the Southwest by having Venetian glass created to look like the prized stone. Native American jewelers would use the beautifully colored, false stone when the real thing wasn’t available.

Just as ancients painted wooden pendants to imitate the desired color, synthetic turquoise now reflects the beauty of the sought-after authentic prize, at a much lower cost. If the color captures the ideal, it is a treasure. But conscientious shoppers who are concerned about whether they are buying a quality stone should remember: Caveat emptor.

Regardless of the color, turquoise holds prestige and power. Native American deities carry weapons and live in homes made of turquoise. The Apache believe turquoise filled the pot at the end of the rainbow. Zuni ceremonies include turquoise-colored face, mask, and body paint to represent Awonauilona, the sun’s life-giving power.

Its power is so great that no horseman would ride while carrying turquoise; it would tire the horse. Similarly, hunters drew lines with turquoise between the tracks of game to slow the game down. Hanging from bags in households, turquoise protects against misfortune.

Turquoise bracelets, necklaces and rings are wearable bank accounts; in the past, Native Americans used pieces as deposits for goods needed from traders. When they sold their crops or wool, the traders were paid and jewelry was reclaimed.

It is estimated that Native Americans had been working with turquoise about 1200 years before the Spanish arrived, with the heaviest mining taking place between AD 1350 and 1600. Roughly 200 mines have been discovered throughout the Southwest, most believed to have been started by Native Americans, who used shaped stone hammers, mauls and adzes to chisel the pieces of sky out of the rock.

The largest ancient turquoise mine was found at Mount Chalchihuitl, near Cerrillos, NM. Some turquoise found at Chaco Canyon came from mines in the Cerrillos area, more than 150 miles to the southeast.

Turquoise jewelry evolved as a companion of conquest.

In their 800-year reign of Spain, the Moors introduced crescent moons and the shape of pomegranate blossoms into Spanish culture. The Spaniards, seeking gold and silver, rode into Native American communities on horses wearing bridles bedecked with crescents.

The Navajo, especially, liked the symbol. They traded for it or captured it. The shape of the crescent became a naja at the base of a squash blossom necklace. Pomegranate blooms, a pattern used widely by the Spanish, inspired the squash blossoms themselves.

It is widely believed that the first recognized Native American blacksmith, Atsidi Sani, learned the craft from a Mexican blacksmith while touring “Navajo Land” with an American Indian agent in 1853. He may have added silversmithing to his skills during or after he was held prisoner at Fort Sumner, after he and his people were forced to relocate from Arizona.

Atsidi Sani and his students spread the skill. Zuni craftsmen learned the skill from Navajo teachers. Over the years, techniques and styles comingled, in lavish ways such as Navajo silver-stamped boxes decorated with Zuni inlay work.

Because of the work of contemporary Native art founders Charles Loloma, Kenneth Begay and others, current Native American jewelers no longer have to meet the expectations of viewers who only know Native American art as “traditional.”

Instead, they are free to merge their own inspirations with the skills and traditions they have learned throughout their lives.

Among them are Angie Reano Owen (Santo Domingo) – who, looking for a new avenue for creation amid the traffic jam of 1970s heishi, revived inlaid jewelry traditions – and Na Na Ping (Pascua Yaqui), whose elegant inlaid jewelry bears the work of a true lapidary, with stones that are meticulously cobbled together.

Both also took their paths away from tradition to reach their artistic vision. Owen merges the old (such as using wood as the backing for a bracelet) with the new (the black matrix that outlines each stone in her mosaics). Ping cuts stone with the skill taught to him by his uncles, but combines the stones in modernistic blends of color and angularity.

Like many modern Native jewelers, both are able to express their traditions in a contemporary voice.

Despite turquoise’s close identification in the US with the Southwest, other parts of the world have long held turquoise in high esteem.

Turquoise was used on the gold funeral mask of King Tutankhamen in Ancient Egypt. 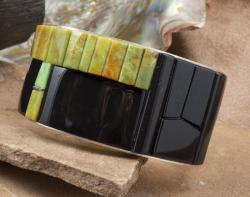 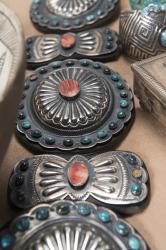 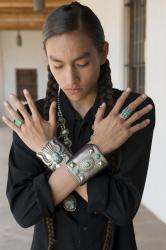 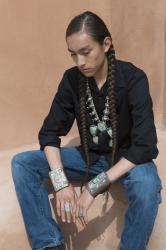 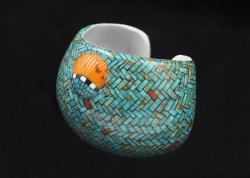 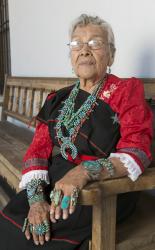 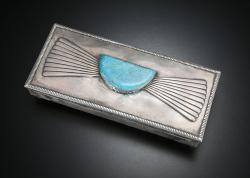 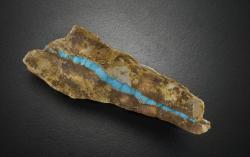 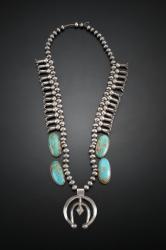 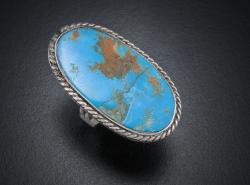 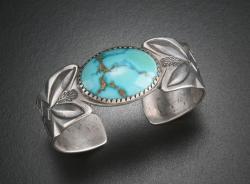 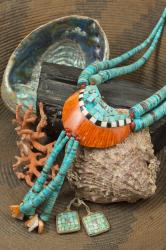 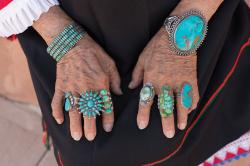 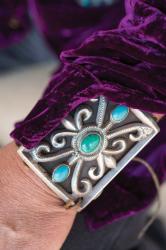