Tom Leech, director of the Palace Press, and Arlyn Nathan, a book designer and typography instructor at the Santa Fe University of Art and Design, have won the 14th Carl Hertzog Award for Excellence in Book Design from the University of Texas at El Paso’s Friends of the Library. The award recognizes Jack Thorp’s Songs of the Cowboys, published in 2012.

Leech, along with J.B. Bryan, also won honorable mention for the design of Margaret Wood’s memoir, O’Keeffe Stories. In his announcement letter, Robert Stakes, director of the UTEP Library, said “it is the first time a single Press was selected as both the winner and as honorable mention in the same year.” Leech was also a recipient of the 2013 Santa Fe Mayor’s Award for Excellence in the Arts.

“It is tremendously gratifying that the judges noted the very qualities that we attempted to get into the book,” said Leech, shown at left printing the cover for Jack Thorp’s Songs of the Cowboys. “Arlyn and I are equally thrilled for everyone else who worked on the book. Mark Lee Gardner introduced the book, and Ronald Kil created beautiful illustrations. We also included a compact disc with the songs performed by Mark Gardner and Rex Rideout. My colleague James Bourland assisted with the printing, and Priscilla Spitler did the beautiful binding.”

Need a photo? Click on "Go to related media" at the top of this page.

The Press at the Palace of the Governors was established in 1970, when the museum acquired most of the contents of the Estancia News-Herald print shop, including the platen press used to print Jack Thorp’s Songs of the Cowboys in 1908. As keeper of New Mexico’s printing heritage (which began in 1834), the Palace Press is more than a collection of machinery. It is a vital center for the revival, stimulation and pursuit of the book arts. It publishes award-winning, limited-edition books and broadsides and has a library of more than 500 volumes of graphic arts titles available for research. It also houses a re-creation of legendary artist Gustave Baumann’s print studio.

“It was Jack Thorp who was first inspired to preserve cowboy music, and that, in turn, contributed so much to the icon of the American cowboy,” Leech said. “Modest as it is, that first edition of Songs of the Cowboys is a national treasure. It took nearly twenty years of collecting and writing for Jack to get his manuscript to the printer, so our years of work on this new edition seemed well worth the effort. As Westerners we feel we owe Jack Thorp a great debt, which we tried to repay with a book that would make him proud, or at least, earn his blessing. I’d love to think that Carl Hertzog would also look favorably on our effort.”

The Carl Hertzog Award for Excellence in Book Design is meant to underscore the importance of fine printing as an art, encourage work by new and established artisans, and to biennially recognize outstanding accomplishments in the field. Hertzog was a prominent typographer and book designer who brought his international renown to the then-Texas College of Mines in 1948. He launched Texas Western Press in 1952 and served as its director until 1972. The University Library has many volumes published by Hertzog in its collection, each bearing a standard of excellence that is unparalleled to this day.

One of the judges, Gerald Lange (who received the first Hertzog Award in 1991), said the winning entry, “seemed the perfect selection, not only because of its exceptional execution and production perfection, but also because it seemed to be so in tune with the tone and work of the awards’ namesake.” Judge Antonio Castro said Bryan and Leech’s O’Keeffe Stories had “a subtle, elegant and quiet beauty.” Bound by Rosalia Galassi of Santa Fe, it also features an engraved portrait of Miss O’Keeffe by Barry Moser.

Haven’t purchased your copy of Jack Thorp’s Songs of the Cowboys yet? A few are still available for $350. O’Keeffe Stories is also available for $225. Call the Palace Press at 505-476-5096 for details.

For more information about the Friends of the Library and to see a list of past winners, visit: libraryweb.utep.edu/about/friends.php. 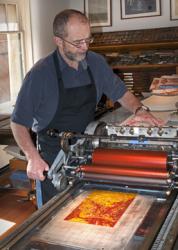