Santa Fe, NM—Santa Fe style represents a state of mind held by those who live in this town either as full-time or part-time residents. Santa Fe style influenced fashion and design worldwide. It is not just jewelry and clothing but a feeling inside, a sense of place and that total belief in the Navajo saying, “Walk in beauty.”

The spirit of Santa Fe style has inspired an exhibit with the same name at the Museum of Indian Arts and Culture. Native Couture opens December 16, 2007 and has been extened to run through June 1, 2009. Drawing from the museum’s incomparable collections, this exhibition showcases both old and new jewelry – 1880 to the present. The exhibition will explore the history of Santa Fe style and what it incorporates.

The focus of Native Couture revolves around the Dicky Pfaelzer Jewelry Collection donated to the museum by her children in 2005. Dicky, a style-setter, was known throughout town for creating a statement with her beautiful jewelry and exquisite clothing and a fixture on the Santa Fe gallery scene for more than eighteen years. (She also drove a station wagon painted with lizards and other Southwest iconography)

Even today, in the spirit of Dicky Pfaelzer, vibrant individuals celebrate local culture by adorning themselves in jewelry and fashions influenced by Native American, Hispano and Western Frontier aesthetic traditions. Unique and eclectic, Santa Fe style is emblematic of the American Southwest.

Native Couture: Santa Fe Style, while focusing around Dicky Pfaelzer and her jewelry collection, is the ever-changing story of jewelry and fashion in the American Southwest, especially Santa Fe. Yet some elements remain timeless, such as the imagery; bears represent hunting and the prayers associated with a successful hunt along with the power of the animal. The naja at the end of the squash blossom is a Moorish symbol with hands encompassing good spirits along with the squash blossoms signifying a good harvest. The religious cross and sacred heart symbols are used in the Catholic Church. The inner gems demonstrated in the pair of coral bracelets by Dan Jackson are a later representation of the turquoise bracelet with turquoise stones at the wrist as well as the top. The western tradition of cows heads, stars, hearts and badges is everywhere in the iconic popular culture of the west.

Santa Fe style is a tradition of jewelry making by Native Americans, Anglo Americans, and Spanish Americans alike that utilize easily attainable or local materials such as coins, copper, silver, and turquoise and traded materials such as precious and semi-precious gems, coral, and shell. An example of this style evolution is seen in the jewelry tradition of bow guards. Here the functionality of protecting the wrists while using a bow and arrow in earlier times developed into a purely aesthetic use of the longer 1950s bow guard which has just as ornate silverwork but the usefulness of the item is less important than its beauty. Also on view will be richly decorated concha belts, necklaces, ear rings, bracelets, hat bands, dresses, and jackets.

Functional items can also be fashionable. The bow-guards, purse, hair combs and barrettes, buttons, and dress ornaments exhibited are both beautiful and serve a multi-faceted daily function. Overtime, the look of these functional yet fashionable items has changed as we see with the contemporary bracelet and necklace from the twenty-first century compared to the bracelets and necklaces from the late- nineteenth and early-twentieth centuries to a contemporary neck collar.

“Santa Fe style for me, is the exuberant self expression of the individual. Perhaps other people of the world can bring this look into being, but I doubt that any city on earth does it as distinctively as do the residents of Santa Fe, New Mexico. We Santa Feans not only fill our homes and gardens with art, but we make ourselves a moving canvas, blending artist-driven clothing, jewelry and accessories to make a statement of who we are. I think Dicky Pfaelzer was the best example of this same spirit. She expressed Santa Fe style in her own unique way. She wore outstanding Native American Jewelry and fabulous clothes with real panache. She was an inspiration to all who had the pleasure of knowing her.” This, from Helene Singer Merrin, a donor to the exhibition and one of these “vibrant” individuals herself. 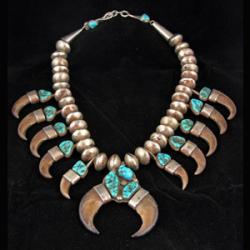 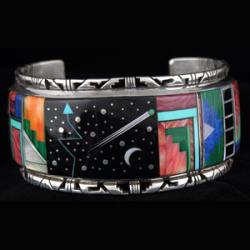