Among the artists on view are Vidal Casiquito, Jr. and José Rey Toledo of Jemez, Gilbert Atencio of San Ildefonso, and Pablita Velarde of Santa Clara, as well as several pieces by Zia artist, Velino Shije Herrera, who in the early 1930s painted the murals in the reconstructed Kiva at the Coronado Site. Pueblo lifeways is the exhibition’s theme.

Easel painting style was popularized by pioneering instructor Dorothy Dunn who taught at the Santa Fe Indian School between 1932 and 1937. These works are characterized by their two-dimensional, flat outlined forms, derived from the abstract and geometric shapes found in rock painting, traditional painted pottery, Kiva murals, and earlier ledger drawings depicting Native cultural traditions and lifeways in New Mexico.

Dunn preferred that her students rely on their natural ability and remembrance of their cultural traditions in their works which gives us, the present-day viewers, great insight into our Southwest heritage. Visitors to the exhibition will see that these works tell a story and can compare them with the ancient Kiva paintings in both the mural room and in the painted Kiva at the site.

Admission is $3 per adult; children 16 and under are free. Admission to the exhibition is included with the entrance fee to the site. New Mexico seniors are free on Wednesdays and all New Mexico residents are free on Sundays. Coronado Historic Site is located on US 550 in Bernalillo. It is open daily except Tuesdays, from 8:30 am to 5:00 pm.  For more information: 505-867-5351, www.kuaua.com or www.nmhistoricsites.org.

Coronado Historic Site is a division of the New Mexico Department of Cultural Affairs.

More information on Coronado Historic Site can be found on its web site; http://www.nmmonuments.org/coronado 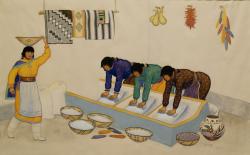 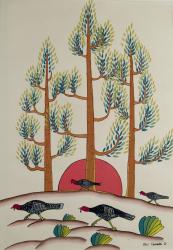 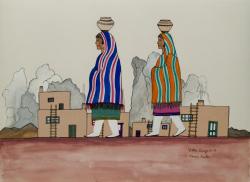