As a viceregal capital for the far-flung Spanish empire, Mexico City served as an official seat for international trade, politics, and religious orthodoxy, but it also sheltered a heterogeneous population that laughed, played, prayed and struggled to survive through floods and famine. Rituals similar to the annual Fiesta de Santa Fe marked much of daily experience, from large government-sponsored festivals to parish saint devotionals and simple home liturgies.

On Wednesday, September 2, at 6 pm, Dr. Linda A. Curcio-Nagy, associate professor and chair of the Department of History at the University of Nevada, explores those early rituals in the 2015 Santa Fe Fiesta Lecture. Her talk, "Performance, Politics, and Piety:  Pageantry and Identity in Colonial Mexico City," is free for Palace Guard members; $5 others, at the door. (To join the Palace Guard, call the Museum of New Mexico Foundation at 982-6366, ext. 100.

Curcio-Nagy will explore how citizens participated in and defined their lives through rituals that also became a means to express pride in the capital and membership in groups like confraternities. They were also a means of mitigating and understanding disasters, both imperial and personal. Group and individual devotions granted believers a forceful way to reach and beseech the divine. They gave people a means to express identity and a way to feel they had a measure of power in a world where average citizens had little. Dancing in an entrance to the viceroy, perfecting a magic spell before a carnival, or taunting a penitente during an auto-da-fé provided an avenue for emotional expression and experience on a scale little imagined today.

Curcio-Nagy is a cultural and religious historian who specializes in colonial Mexico. She received her bachelor’s in international affairs and Latin American studies at George Washington University and studied in Spain and Colombia as part of her undergraduate training. She holds a master’s in Hispanic literature, for which she specialized in Latin American poetry and prose. After a stint at the International Monetary Fund, she headed to New Orleans to begin doctoral work at Tulane University’s prestigious Roger Thayer Stone Center for Latin American studies. While there, she directed the center’s Summer in Mexico Program and its Latin American Curriculum Resource Center. She has published many articles as well as the award-winning Great Festivals of Colonial Mexico City: Performing Power and Identity (University of New Mexico Press, 2004) and, with William H. Beezley, Latin American Popular Culture: An Introduction (Scholarly Resources, 2000).

She is finishing a book manuscript, Grave Sins of Sensuality in Colonial Mexico, that examines popular ideas regarding sin, moral behavior, and salvation during the 16th and 17th centuries. A new project analyzing masculinity and magic during the 17th century is well under way. Curcio-Nagy teaches a wide variety of courses on ancient, colonial, and modern Latin America. She won the College of Liberal Arts’ Alan Bible Teaching Award, the Edward Liewen Prize for Teaching from the Rocky Mountain Council for Latin American Studies and, just this year, received the University of Nevada’s highest teaching award, the F. Donald Tibbitts Teaching Prize.

Download a high-resolution image of a 1709 ceremony by clicking here. 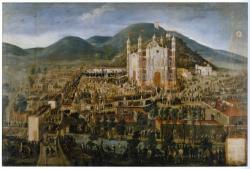