The lives and contributions of distinguished artists Margarete Bagshaw, Josephine Myers-Wapp, and Jeri Ah-be-hill will be celebrated at the Museum of Indian Arts and Culture as part of Women’s History Month. The free with museum admission program will be on Saturday, March 26 from 1 to 4 pm.

The legacies of Santa Clara artist Margarete Bagshaw, Comanche educator and master craftsperson Josephine Myers-Wapp, and Kiowa/Comanche arts dealer and arts educator Jeri Ah-be-hill, all recently deceased, have had a profound impact in the areas of Native American painting, textile and clothing design, as well as Native arts marketing. Each contributed to ensuring a vibrant future for indigenous arts and their presence in the field will be greatly missed. Join us to celebrate their lives with a free program featuring stories and a selection of short films presented by family members and colleagues. A reception follows the presentations.

Margarete Bagshaw (1964-2015). The daughter of artist Helen Harden and granddaughter of Santa Clara Pueblo artist Pablita Velarde, Margarete Bagshaw was a powerful artist in her own right.  Bagshaw’s dynamic color palette and complex compositions is instantly recognizable and pays tribute to her mother and grandmother. And yet, like them, Bagshaw forged her own direction in her work. “I’ve been able to use color in ways that my grandmother and mother never would have considered. Grandma didn’t use translucent colors. Mom perfected the spray veils and used metallics, but I change color by layering color over color or color over pattern and pattern over color. Everything becomes a three-dimensional production of images.” Bagshaw’s achievements included opening a Santa Fe museum dedicated to Native American women artists, writing a memoir, and the 2012 exhibit at MIAC Margarete Bagshaw: Breaking the Rules.

Josephine Myers-Wapp (1912-2014). Wapp was born in Apache, Oklahoma, where she learned Comanche ways from her grandmother, Tissy-Chauer-Ne.  She studied at St. Patrick’s Mission in Anadarko, Oklahoma as well as Haskell University in Lawrence, Kansas. The turning point in her life came, however, when Wapp  entered the arts education program at the Santa Fe Indian School where she studied fiber arts and education. In 1962 Wapp became one of the first instructors at the newly established Institute of American Indian Arts where she taught traditional techniques of art, including textiles, fashion design, beadwork, and native dance. Scores of Native American students remember Wapp as a tireless, inspirational instructor who devoted her life to the revitalization of indigenous cultures. Her award-winning, creative work has been exhibited throughout the United States, Canada, Europe, South America, and the Middle East.

Jeri Ah-be-hill (1934-2015). Ah-be-hill was born in Apache, Oklahoma, and attended Riverside Indian School, Anadarko, Oklahoma, where it is said her lifelong passion for indigenous traditional clothing began. Around 1964, Jeri and her husband Richard Greeves opened the Fort Washakie Trading Company on the Wind River Indian Reservation in Wyoming. In 1988, she moved to Santa Fe, NM, with her two daughters, Keri and Teri, who are now widely acclaimed Native artists. Jeri’s presence in Santa Fe’s indigenous arts market looms large as expressed by Marcus Amerman, “She was a giant! She was an icon and a powerhouse and a dynamo. She wasn’t tall but she had a powerful, intelligent, cultural presence that always made her appear bigger than anyone in the room. She was a great friend and supporter of Indians and artists everywhere and loved, and was loved like the mother of an entire people.”

About the Museum of Indian Arts and Culture: As the 19th century closed, one of the Southwest’s major "attractions" was its vibrant Native American cultures. In response to unsystematic collecting by Eastern museums, anthropologist Edgar Lee Hewett founded the Museum of New Mexico in 1909 with a mission to collect and preserve Southwest Native American material culture. Several years later, in 1927, John D. Rockefeller founded the renowned Laboratory of Anthropology with a mission to study the Southwest’s indigenous cultures. In 1947 the two institutions merged, bringing together the most inclusive and systematically acquired collection of New Mexican and Southwestern anthropological artifacts in the country. 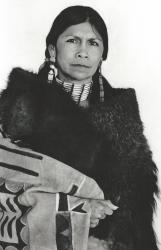 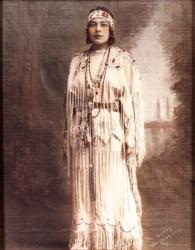 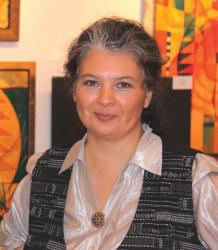