FOR IMMEDIATE RELEASE: March 30, 2017 (Santa Fe, NM)—The New Mexico State Library has announced the state level champions of the 2017 Letters About Literature competition. This annual writing contest for young readers in grades 4 through 12 is made possible by a generous grant from the Dollar General Literacy Foundation and is administered nationally by the Library of Congress Center for the Book.

Letters About Literature encourages young readers in grades 4 -12 to read a book and write a personal letter to the author explaining how the book changed or shaped their perspective on themselves or the world. The New Mexico State Library manages the state level program and submits a champion to the national competition for each of the three levels. Raven Callaway-Kidd, a fifth grade student at Turquoise Trail Elementary in Santa Fe, is the Level 1 champion.  Raven wrote her letter to Holly Schindler about her book, The Junction of Sunshine and Lucky. Natashia McDonald, an eighth grade student at Des Moines Municipal Schools in Des Moines, is the Level 2 champion. Her letter is addressed to The Fault in Our Stars author, John Green.

Rebekah Hildebrant, an eleventh grade student at Arrowhead Park Medical Academy in Las Cruces, is the Level 3 champion. Rebekah wrote her letter to Rick Riordan about his books The Lightning Thief and The House of Hades.

The judging panel was comprised of government officials, librarians, authors, and book professionals from across the state including Department of Cultural Affairs Cabinet Secretary Veronica N, Gonzales;  State Librarian, Kathleen Peiffer; Retired State Librarian, Ben Wakashige; State Library Commissioner, Elizabeth Martinez; John Byram, Director of the University of New Mexico Press; Corey Bard, Ruidoso Public Library Director; Kristina Carter, Youth Services Librarian, Clovis-Carver Public Library; Susan Beck, Professor and Head of Access Services, New Mexico State University Library; and Sarah Stark, Author, Santa Fe. The three New Mexico champions’ letters now advance to the national competition and will be sent to the Library of Congress for the national judging round, where they will be competing for a $1000 cash award. The results of the national contest will be released in early May.

The New Mexico State Library, established in 1929, is committed to providing leadership that promotes effective library services and access to information to all citizens of New Mexico.  The State Library provides services that support public libraries as well as delivers direct library services to rural populations, state agencies, the visually impaired and physically disabled, and students and citizens conducting research. Citizens benefit from State Library services provided directly in Santa Fe and through the state-wide Rural Services program (bookmobile services for those towns without a public library and books by mail services for homebound citizens) and Library for the Blind and Physically Handicapped program. The State Library also offers access to a state-wide database, Magazines Online, to all New Mexicans. There are more than 2 million items in the State Library’s collection. The New Mexico State Library, a part of the executive branch of state government, is a division of the Department of Cultural Affairs (DCA). 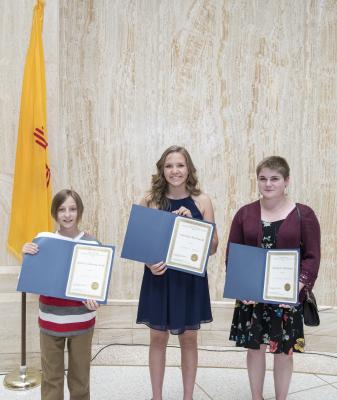