For Immediate Release: April 19, 2017 (Albuquerque., NM) – Revered and feared in folklore, owls are found throughout New Mexico. From open desert to mountain forest, these powerful hunters have evolved extraordinary senses to pinpoint their prey. For a limited engagement, the New Mexico Museum of Natural History and Science (NMMNHS) reveals this world in the Owls in the Land of Enchantment exhibition from April 15 through September 25, 2017. Images featured in Owls in the Land of Enchantment were captured by local amateur photographer Dennis Dusenbery.

“Through the ages, people of all cultures have been mystified by owls,” said Margie Marino, Director of the NMMNHS, “This fascinating exhibition explores owl habitats, breeding and feeding habits. It features some specimens that are very old from the Natural History Museum’s Bioscience collection and on loan from the Bird Division at the Museum of Southwestern Biology at the University of New Mexico.”

The photos by Dennis Dusenbery tell us a lot about this owl family, and owls in general. “This is a great example of where art meets science – both require careful observation and the time to look carefully,” said Ayesha Burdett, Bioscience Curator. “It’s wonderful to be able to take a close look at these magnificent birds.”

From the courting that begins in the fall, to spring nesting, hatching, feeding, and development of the chicks, the exhibition tracks one breeding season for a pair of local owls. Visitors can also learn about various species of owls and their habitats in New Mexico, exploring every aspect of this nocturnal, carnivorous hunter. 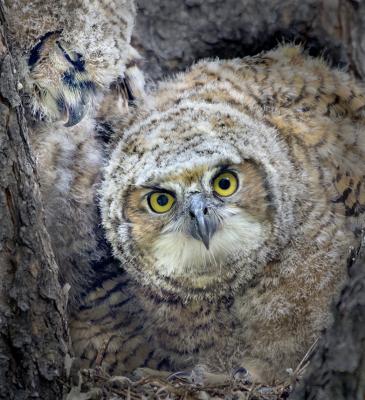 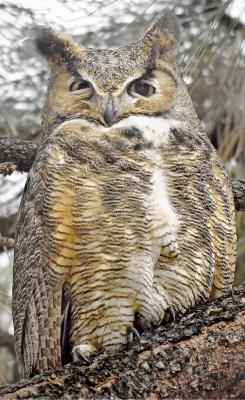