(Santa Fe, NM)— The New Mexico History Museum is hosting a Fiesta Symposium focusing on the history of the Pueblo Revolt, the Reconquest, and the Fiesta itself.  Featuring an array of presenters, this event aims to open broader understandings of the complexities of New Mexico’s history. The day will culminate in a roundtable community conversation in which audience members are invited to participate.

The event, scheduled for Wednesday, September 6 from 10:30AM - 4:30PM, presentations offer a substantive look into various interpretations of New Mexico’s rich history. Presenters include Stephen Post, an archaeologist and research associate and former deputy director for the Office of Archaeological Studies, Department of Cultural Affairs. He is the co-curator of Santa Fe Found: Fragments of Time, located in the west end of the Palace of the Governors. Post has been integrally involved in the Palace’s archaeology since 1978. The symposium will also feature the film Veiled Lightning by director Jaima Chevalier. This documentary explores the culture of protest in Native America and beyond—as seen through the lens of the Pueblo Revolt of 1680.

Photographer Steven Katzman will discuss his project titled This Miserable Kingdom, a photographic survey documenting minorities who have dealt with government’s actions upon its own indigenous peoples, with the primary focus on Pojoaque Pueblo located in Pojoaque, New Mexico. Artist Virgil Ortiz who hails from Cochiti Pueblo will share insights into his provocative multimedia artistic approach to raise awareness of Pueblo culture, including the ongoing cultural significance of the Pueblo Revolt and the Reconquest. This event will culminate in a community conversation about this history. All who attend may partake in this discussion.

“All history must be approached from an assumption of complexity,” said History Museum Executive Director Andrew Wulf. “Few geographical areas boast as complicated, unresolved and ever-present reminders of such a history as New Mexico. Since First Contact in 1540, all the various groups who called and would name New Mexico their home were forever changed through these interactions with one another. It is our intention to open the conversation from various viewpoints during Fiesta season.” 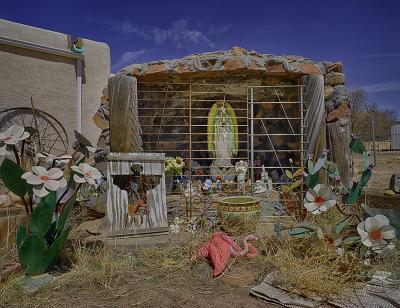