(Santa Fe, NM) – A few days after his new book comes out, Santa Fe artist Paul Pletka will give a lecture at the New Mexico History Museum auditorium on Saturday, October 7, from 2:00-4:00PM.  The lecture entitled Converging Rituals of Faith in the New World will be followed by a discussion with curator Andrew Connors of the Albuquerque Museum.  Following the discussion, Pletka will sign copies of his book, Paul Pletka: Imagined Wests by Amy Scott (Author) James K. Ballinger (Foreword), Paul Pletka (Contributor).

Born in San Diego in 1946 and raised in the American Southwest, painter Paul Pletka has created a body of work that owes much to the West of his childhood, and more to the West of his imagination. Infused with an operatic sense of theater and drama, his paintings conjure scenes from the cultures, history, and religions of the American West and Mexico—diffused, as Pletka writes, “through the lens of personal experiences, dreams, research, and ancestral memory.”

In Paul Pletka: Imagined Wests, the first book on this major American artist in over thirty years, readers will encounter the full range of Pletka’s oeuvre through more than eighty color reproductions of his best-known and most influential works. Images of warriors and shamans are paired with depictions of George Armstrong Custer, Christian saints, and the lost gods of North and South America, their forms rendered in a distinctive style that mixes classical drawing and expressionist distortion with elements of surrealism and European symbolism. An artist statement and notes on selected paintings provide rare insight into Pletka’s creative process, and an introductory essay by art historian Amy Scott discusses how Pletka’s studies of indigenous cultures of the American West and Mexico, as well as art historical and critical influences, have informed his work. Complex, mysterious, and mesmerizing, Pletka’s paintings are designed to make it almost impossible to look away. In their boldly conceived subject matter, vivid color, and ethnographic detail, these works—and their creator—are true originals in the rich artistic landscape of the American West.

Pletka’s lecture titled: “Converging Rituals of Faith in the New World” is inspired from a series of paintings highlighted in his new book.

Following the lecture, Albuquerque Museum Curator Andrew Connors joins in the discussion, bringing his provocative new vision to New Mexico’s Art History, with the query, who is a real New Mexican and what is the real New Mexico?

“The broader our vantage point can be, told through hundreds of different artistic voices, the more we are going to come close to understanding this place we call the common ground of New Mexico,” Connors said. 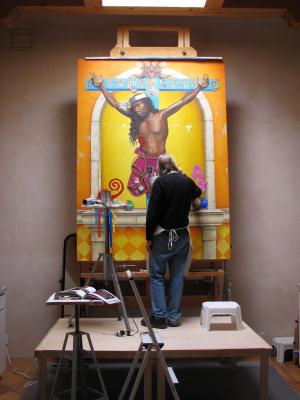 Portrait of Paul Pletka. Collection of the artist. Photograph by Nancy Benkof 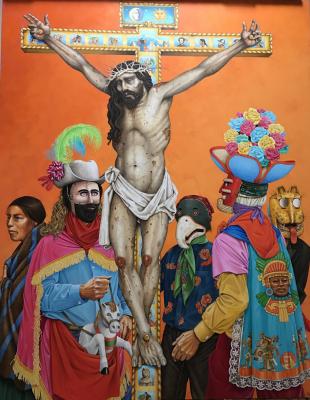