50 YEARS OF MUSIC, ACTIVISM, AND EDUCATION:


The National Hispanic Cultural Center (NHCC) and Avokado Artists showcase legendary Chilean ensemble Inti-Illimani, as part of the series Festival Chispa Presents, on Wednesday, October 11 at 7:30 PM in the NHCC’s Albuquerque Journal Theatre. Tickets are $22 and $27, with a $2 discount for students and seniors and a $3 discount for NHCC members, and are available from the Center’s Box Office, at 505-724-4771, or at www.nhccnm.org. Inti-Illimani will perform at the NHCC on the group’s 50th anniversary tour.

Founded in 1967 by students at Santiago’s Universidad Técnica del Estado, Inti-Illimani has performed worldwide for hundreds of thousands of fans, collaborated with legendary artists, earned awards and honors for activism as well as musicianship, and produced one of Latin America’s richest discographies. On tour during the 1973 military coup in Chile, they remained in Italy in de facto exile until 1988, touring Chile days after they were no longer banned from the country and returning permanently in 1990. The time in Europe added elements of other musical genres to their music, creating a fusion of folk/Latin/contemporary classical/avant-garde/world music played on over 30 instruments. They have lectured extensively on Latin American folk/indigenous music, culture, and social change, and founded and teach at an arts-centric school in one of Santiago’s poorest neighborhoods.

Still including one of the original founders, the group now celebrates 50 years of performing music grounded in their beloved Chile, yet continuing to reach across time, space, and nations. More than a musical ensemble, they have become a cultural location, expressing the essence of the Latin American ethnomusical experience. Their current tour also promotes an album recorded in homage to the legendary Violeta Parra for her centenary.

Festival Chispa Presents is a partnership with Avokado Artists that showcases some of the finest and most innovative groups, both legendary and up-and-coming, that the Latino world has to offer. Fusing various musical genres, cultures, and traditions, this dynamic series breaks down musical boundaries and leaves the audience wanting more!

Avokado Artists, a non-profit arts organization, is dedicated to cross-cultural understanding through art and the cultivation, promotion, presentation and preservation of culturally significant artists and their work from around the globe.

The National Hispanic Cultural Center is dedicated to the preservation, promotion, and advancement of Hispanic culture, arts, and humanities, and is a division of the New Mexico Department of Cultural Affairs.

If you would like more information, contact Kinsey Cooper, marketing and public relations office, NHCC, at 505-377-8968 or kinsey.cooper@state.nm.us. 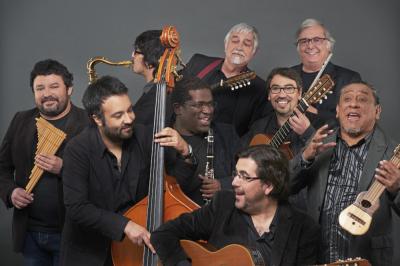