During the course of his amazing life, he developed his artistic talent, capturing scenes from the pioneer days through contemporary times. A show featuring his work will be displayed in the New Mexico Farm & Ranch Heritage Museum’s Arts Corridor from Aug. 17 through Dec. 2.

The opening reception for the exhibit, “Jacob Pfeiffer: My Long Journey,” is from 5-7 p.m. on Aug. 16. The reception is free and includes refreshments.

Pfeiffer, who moved to Las Cruces in 2013, specializes in oil painting on canvas and linen. His works in the show feature scenes of Native Americans and early settlers, animals, and even scenes of local sites like the Museum and the Las Cruces Farmers’ & Crafts Market. There are 26 included in the show.

Growing up in Romania, Pfeiffer began drawing pictures of animals as a young child.

“In World War II, Romania fell to Communism,” Pfeiffer said. “At age 12, my parents and I fled on foot to Austria. There, I learned of American Indians who had also lost their way of life, and I began to portray them when they were self-reliant and free.”

Pfeiffer came to the United States when he was 19, worked at various jobs and took art classes at night. Soon, a prominent Cincinnati gallery offered him a solo show that was a great success.

“I was their ‘Western artist’ for decades, and was also picked up by galleries out West,” he said. “With my wife and two young sons, we bought a farm, growing much of our own and our animals’ food.”

Pfeiffer says his work has evolved over the years, depending on the subject matter. He has received dozens of awards and his work has been displayed in galleries all over the country. 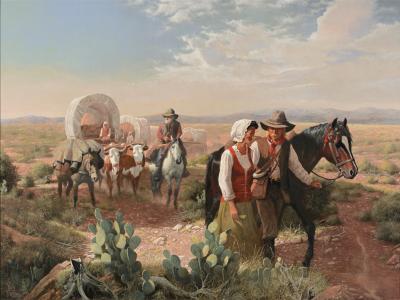