(Santa Fe, New Mexico) – Santa Fe’s Museum of Indian Arts & Culture Director Della Warrior, a member of the Otoe-Missouria tribe, is named as the recipient of the Association of Tribal Archives, Libraries and Museums (ATALM) Lifetime Achievement Award, in recognition of her work which has significantly contributed to the preservation and understanding of Indigenous cultural heritage. Warrior has focused her life’s work helping bring about positive change for Native people in educational arenas, tribal governments, Native history, arts and culture.

Warrior is being presented with the Lifetime Achievement Award at the 2018 International Conference of Indigenous, Archives, Libraries and Museums: For Our People, Past, Present and Future, at the Mystic Lake Center in Prior Lake, Minnesota on October 11, 2018.

Warrior’s exemplary accomplishments are evidenced first in her graduate degree from Harvard University in 1971, followed by her appointment as Director of Indian Education for Albuquerque Public Schools where she served for eight years developing numerous award winning scholastic achievement programs for the large Native student population. She left that position to become her tribe’s first female chairperson and CEO for the next four years where she implemented their tribal law and court system, adult vocational training program, adolescent health and delinquency prevention programs, and numerous economic development projects building tribal revenues.

In 1993, Della began her engagement with the Institute of American Indian Arts (IAIA) in Santa Fe as their Director of Development, becoming the President of IAIA in 1998 and serving in this role until 2006. During this period, her wealth of experience, credentials, and strengths paved the way for the development of a multi-million dollar state of the art campus for the college and guided the initiatives for the Institute to receive 10-year national accreditation for its two-year and first four-year academic degree programs making IAIA one of the very first Tribal Colleges to attain such distinction.

From 2006 to 2013, Della served as Lead Consultant for the development of the Native Arts and Culture Foundation, Chief Operations Officer for the Yocha Dehe Wintun Nation and Director of the Multi-Cultural Intermediary for Collaborative Action.

In 2013, Warrior was appointed Director of the Museum of Indian Arts and Culture (MIAC), which holds a world-renowned collection of cultural objects and anthropological artifacts. Once again, the footprint of Della’s deep personal and cultural understanding and commitment to Native people is evidenced with her action plans at MIAC, building tribal community collaborations, engaging Native communities with their tribal museums and tribal libraries and MIAC.

She played a leadership role in developing the new exhibition, ‘Creating Traditions,’ at Disney World’s Epcot Center in collaboration with the Smithsonian National Museum of the American Indian, which opened to the public this past July in the American Heritage Gallery. Della has served on boards of the Smithsonian’s National Museum of American Indians, the White House Initiative on Tribal Colleges and Universities, the American Indian College Fund, the World Indigenous Nations Higher Education Consortium, and the Cultural Resource Fund. Ms. Warrior was inducted into the Oklahoma Women’s Hall of Fame in 2007. 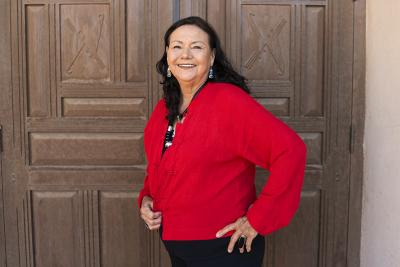