(Bernalillo, New Mexico) -- The Friends of Coronado Historic Site are hosting a lecture entitled “Him Old Ruins: Edgar Lee Hewett and the Archaeology of Pueblo Painting” Sunday, Nov. 18 at 2 p.m. in the DeLavy House in Bernalillo.

Archaeologist Edgar Lee Hewett had a profound impact on art as it developed in New Mexico and beyond. During the early 1900s, he established a school and two major museums in Santa Fe: today known as the School for Advanced Research, the Museum of New Mexico, and the New Mexico Museum of Art. In addition to training the first generation of southwestern archaeologists, he provided jobs and studio space for Santa Fe’s first resident artists and played a key role in the development of Pueblo painting.

Hewett provided support for young Pueblo artists such as Fred Kabotie and hosted the world’s first exhibition of Pueblo watercolor painting. Hewett’s role in establishing the Southwest Indian Fair, precursor to today’s Santa Fe Indian Market, will be discussed during the lecture as well as Hewett’s relationship with the artists.

Guest lecturer, Nancy Owen Lewis has a doctorate in anthropology from the University of Massachusetts and is currently a scholar in residence at the School for Advanced Research in Santa Fe. She is the award-winning author of Chasing the Cure in New Mexico: Tuberculosis and the Quest for Health (Museum of New Mexico Press, 2016) and A Peculiar Alchemy: A Centennial History of SAR, co-authored with Kay Hagen (SAR Press, 2007). She has published five articles on the health seeker movement, including “High and Dry in New Mexico: Tuberculosis and the Quest for Health,” which received the 2013 Gilberto Espinosa Award from the New Mexico Historical Review. She serves on the boards of the Historical Society of New Mexico, the Historic Santa Fe Foundation, and is a fellow of the Society for Applied Anthropology.

The lecture will take place at the Sandoval County Historical Society Museum (DeLavy House) on Edmond Road and Hwy 550, Bernalillo. Admission is $5; Friends of CHS are free. For more information visit: kuaua.com or phone Barb at 815-978-5327. 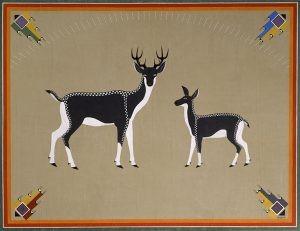