According to Matthew J. Barbour, Regional Manager for the Coronado & Jemez Historic Sites, after removing debris and rubble, the room was found to be quite large, measuring approximately 16 ft north-south by 9 ft east-west. It appears that the room was on the first floor and was part of a much larger multi-story room block, or apartment-like complex. Walls were constructed of stone and adobe and were plastered with gypsum to form a black and white banded design. A small door way along the east wall was the only access to the room which may have served as storage.

The upper story had crashed down into the room -possibly un-expectantly. Beneath the rubble were several broken Rio Grande Glazeware and Jemez Black-on-white vessels. These vessels were almost certainly lying on the floor or on a shelf at the time of architectural failure. Manufacture dates for these bowls and jars suggest abandonment sometime between AD 1650 and 1700. It is very possible that the destruction occurred during the uprising of August 10, 1680. Better known to history as the Pueblo Revolt, this uprising led to the Spanish being expelled from northern New Mexico for over a decade.

Other items associated with the structure included several projectile points, a candle stick holder, two cloud blower pipes, bobcat and elk skulls and a woven yucca mat. Animal skulls are often left attached to pelts and could have adorned the walls of the structure, while the yucca mat extended over at least the northwest corner of the room’s floor. As the room had no hearth, light from candles may have been the only illumination. Most of the projectile points were made of obsidian and were of the Pueblo Side-Notched tradition with concave bases in a “Pecos Style.” Collectively, these items could archaeologically represent a quiver of arrows.

No human remains were encountered. However, butchered animal bones were dispersed throughout the fill and found on the floor. These included portions of elk, deer, bison (or possibly cow), sheep/goat, fish, and a number of large birds and rodents. It suggests Jemez people living at Giusewa had a diverse diet that included hunting in the fields, the mountains, and along the river with possible forays as far away as Llano Estacado or the San Luis Valley.

The pottery, both the vessels found on the floor and in the fill, is unusual for a Jemez Pueblo. There were a large number of non-locally produced decorated vessels, especially Rio Grande Glazewares. Glazewares were rare at the nearby Jemez Pueblo of Unshagi. Most of the glazeware pottery at Giusewa, based on their shiny basalt temper, was manufactured in around the Keres-speaking Pueblo of Zia and was likely acquired through trade. However, it is possible that some Keres also lived at the site with a Towa-speaking Jemez.

All of these findings are very preliminary and will be refined as archaeologists struggle to address questions associated with Jemez origins and acculturation. In the meantime, laboratory analyses and artifacts on display to the public in the Visitor Center at Jemez Historic Site. Preservation, staging, and opening of the excavated room to visitors is anticipated to occur in the spring of 2019 with a final report detailing the results of archaeological investigations out later that year. 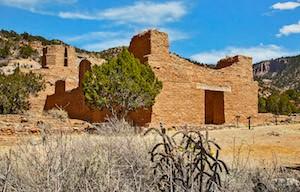 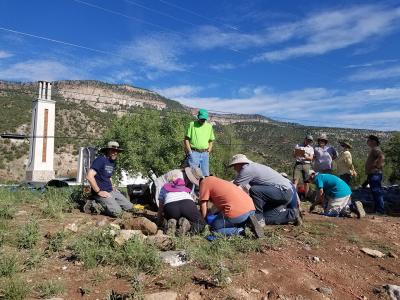 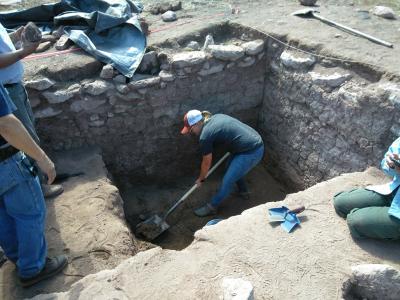 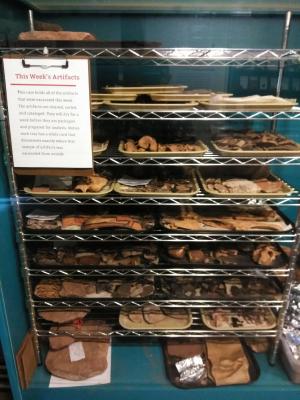 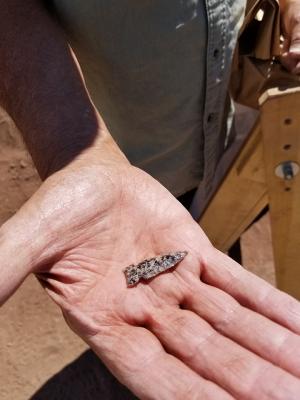 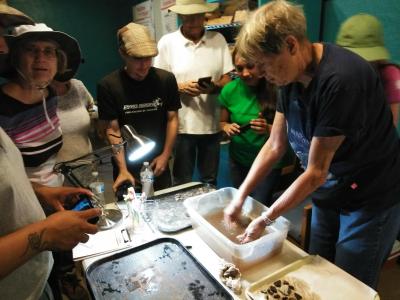