“This is a magical, and absolutely captivating event that is much beloved! Word about what a magnificent spectacle this is has spread, so we have had to come up with a new plan to manage the overflow crowds anticipated this year,” said Matthew Barbour, Regional Manager of the Jemez and Coronado Historic Sites “In the past, Light Among the Ruins has always been popular, but this year, the overwhelming interest we’ve seen on social media prompted us to stagger the times of the event, and to cover the expense of traffic, staffing and crowd management we will now charge a per person fee.”

In addition to covering the cost of hosting Light Among the Ruins, any additional funds collected beyond expenses will help provide for preservation, future exhibits and programs at the Jemez Historic Site.

The event will go on regardless of the weather. No refunds. Shuttles will be available to and from the Jemez Historic Site to parking locations in the Village of Jemez Springs.

During the Light Among the Ruins event the ruins of Gisewa Pueblo and San José de los Jemez Mission Church are decorated with hundreds of traditional farolitos. The evening’s events include Native American flute music and Native American dancers performing between two bonfires (luminarias). The combination of the lights with the pure beauty of the ruins nestled into the gorgeous Jemez Valley canyon walls makes for a magical setting!

About Jemez Historic Site: A short drive from Albuquerque and Bernalillo, the Jemez Historic Site is one of the most beautiful prehistoric and historic sites in the Southwest. It includes the stone ruins of a 500 year old Indian village and the San José de los Jemez church dating to 1621/2. The village of Giusewa was built in the narrow San Diego Canyon by the ancestors of the present-day people of Jemez (Walatowa) Pueblo. The name Giusewa refers to the natural springs in the area.

In the 17th century, the Spanish established a Catholic mission at the village. The mission was short-lived, and, in time, the people abandoned the site and moved to the current location of Jemez Pueblo. The massive stone walls were constructed about the same time the Pilgrims landed at Plymouth Rock. The heritage center contains exhibitions that tell the story of the site through the words of the Jemez people. A 1,400-foot interpretive trail winds through the impressive site ruins.

New Mexico Culture Squared (NMC2) is a NM Department of Cultural Affairs (DCA) project to build and manage partnerships between DCA institutions and cultural organizations that will enhance the impact, effectiveness, attendance, and visitor experience of exhibits and programs of DCA entities. Under the management of AMP Concerts, NMC2 will create programs in collaboration with State Historic Sites, DCA Museums and various cultural organizations with the goal of increasing public programs statewide and promoting New Mexico as a destination for arts and culture. 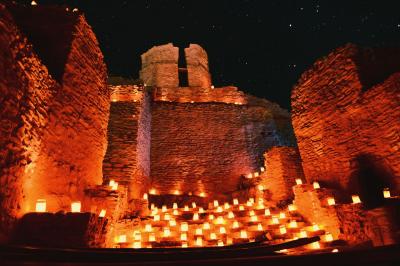 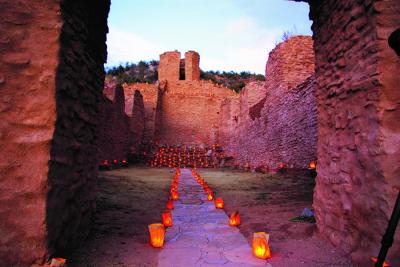