Phillip Haozous began sculpting in the 1970s, already having attained patronage as an actor, Indian flute-maker, flutist, and jeweler. During his time as a jeweler at the Institute of American Indian Arts, he was recognized for his work as outstanding jewelry student of the year. As a sculptor, Haozous trained under his father, Allan Houser, and by 1979, he designed and built the Houser Compound. By 1985, he created the Sculpture Garden at the Allan Houser Compound. Haozous gained acclaim for his work such that he exhibited two of his sculptures at the Salt Lake City, UT, Olympic Games in 2002.

When asked about his own work, Haozous spoke of his process more than his work product. “Creativity is the driving force that satisfies my curiosity. Each creation inspires another; a new design evolves from the previous ones. If only I had more time to devote to what I love best, that is, getting totally immersed in my creative being.”

Belgodère centers her lecture on Haozous’ forms and representations, both in realism and abstraction. She will touch on his inspirations and sources as well as relations between contemporaries’ works. For more than a decade, Belgodère has researched Native history and art, bringing her to Santa Fe each summer. Much of her scholarship has focused on Phillip Haozous and his family including father, Allan Houser and brother, Bob Haozous.

“Phillip Haozous’ modes of representation range from narrative realism to nonrepresentation art,” writes Belgodère. “His works draw upon a number of sources of inspiration including Apache oral and ceremonial traditions, childhood reminiscences and nurturing figures, a motif which he shares with his father, Allan Houser. A deep appreciation of feminine grace and sensuousness is also reflected in his art, as well as his fathers.”

Belgodere is an English and Law professor at both graduate and undergraduate levels at Université du Havre in Havre, France. Her subjects include Native arts and history and she has lectured at the Institute of American Indian Arts, the Allan Houser Compound, the University of New Mexico, and New Mexico State University. Her first book about Indian Corn Dances was published by Les Indes Savantes in 2016.

A Lecture About Phillip Haozous, presented by Jeanine Belgodère

Location: The Museum of Indian Arts and Culture, O’Keeffe Theater 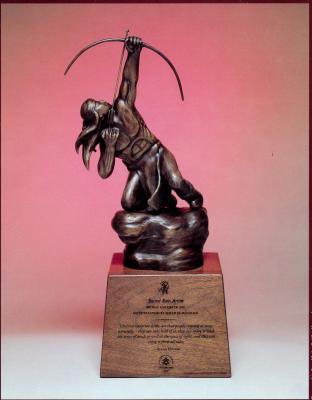