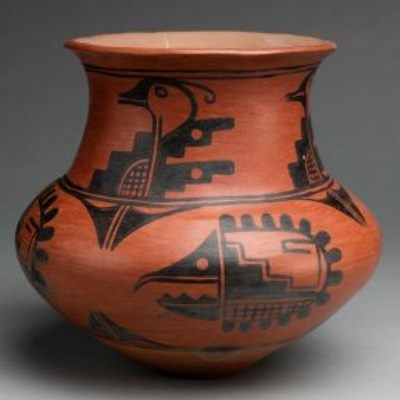 
Panel Discussion — Speakers: Bruce Bernstein, Panel Discussant, with artists Russell Sanchez and Milford Nahohai. Panelists will discuss the roots of the Pueblo Pottery Fund, founded in 1922 and incorporated three years later as the Indian Arts Fund. The talk will focus on the Fund’s impact on those collecting Native American art and its effect on the lives of the artists and their descendants.

Bruce Bernstein is considered one of the leading authorities on Southwestern Native American art. Bernstein received his doctorate in anthropology from the University of New Mexico in 1993. A trained ethnologist, he has worked as a curator and museum director both in Santa Fe and Washington, DC. He currently serves as executive director of Ralph T. Coe Center for the Arts in Santa Fe. His numerous publications include Santa Fe Indian Market: A History of Native Arts and the Marketplace (Museum of New Mexico Press, 2012).

Russell Sanchez is a renowned potter from San Ildefonso Pueblo where he conscientiously and insightfully continues the long traditions of innovative pottery from his village. Russell’s work is found in private and public collections throughout the United States. With winning a prize for his first entry into Indian Market at age eight, he clearly indicated his abilities and intentions of becoming one of the most important potters of the late twentieth and early twenty-first centuries. He learned pottery making from the matriarchs of his village.

Milford Nahohai is from Zuni Pueblo, whose mother, Josephine Nahohai, was one of the first recipients of SAR’s artist fellowship award in 1985. Josephine and her olla maiden sisters danced the Zuni ollas back to life during their fellowship at SAR. Studying older pottery solidified Josephine’s memories, strengthening the family’s resolve to return Zuni pottery to its traditional forms.

Presentations and panel discussions will take place at St. Francis Auditorium. Space is limited. To reserve a seat in advance please go to https://sarweb.org/registration/register-public-talk-pueblo-pottery/

Funding for this program is provided in part by a grant from the New Mexico Humanities Council.