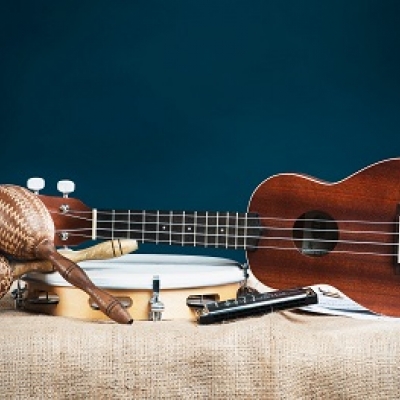 The history of Hispano music allows us to better understand the emotional backdrop of those generations of New Mexicans who lived, loved, and dealt with strife in Santa Fe, and New Mexico, through the centuries.

State Historian Rob Martínez is a native New Mexican born and raised in Albuquerque. A graduate of the University of New Mexico with a B.B.A. in International Business Management. Rob went on to pursue his interest in New Mexican culture and history at U.N.M., earning an M.A. in Latin American history, with an emphasis on church, cultural, and social practices of the Spanish Colonial period in New Mexico. During his tenure as a graduate student, he was a research assistant for four years at the Vargas Project, learning research skills and paleography, abilities that would serve him well as a historian. Upon graduating, Rob pursued a teaching license and also worked for fourteen years as a research historian for the Sephardic Legacy Project, scouring civil and church archives in New Mexico, Mexico, Spain, France, Italy, Cuba, and Puerto Rico, analyzing documents for a research and publishing project about the Crypto-Jewish phenomenon in New Mexico and the Caribbean.

Rob has presented papers and lectures on his research at the University of New Mexico, as well as history conferences throughout the southwestern United States. He has also spoken to historical groups in New Mexico such as the Hispanic Genealogical Research Center of New Mexico, the Albuquerque Historical Society, and the Society for Crypto-Judaic Studies about research methodology, unique findings, New Mexico Hispanic culture, and general History of New Mexico.

Finally, Rob is also a folk musician, performing and promoting New Mexican Hispanic musical traditions for the past twenty years with his brother Lorenzo and their father Roberto Martinez in the group Los Reyes de Albuquerque. With his musical family, Rob has performed in all parts of New Mexico, and on multiple occasions has presented music and New Mexican culture at the Smithsonian Folk Life Festival in Washington, D.C., the NEA’s National Heritage Fellowship Awards, and also at the Kennedy Center for the Performing Arts.