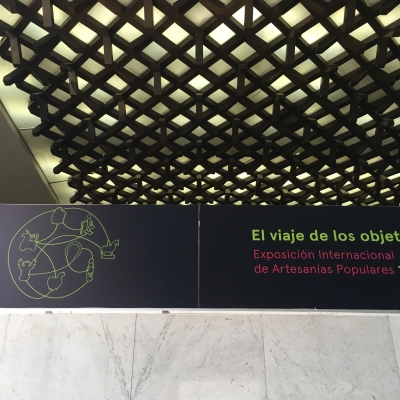 
Lecture with Dr. Deborah Dorotinsky: The International Exhibition of Popular Arts was one of the events that accompanied the XIX Olympic Games in Mexico 1968 as part of the Cultural Olympiad. Crafts, folk arts and arte popular were conceived by the Olympic Organizing Committee as one of the things that united all nations.  However, the games and the cultural program were obscured in Mexico by the repression of the student movement and the Tlatelolco student massacre on October 2nd, 1968. Discourse on world peace was overshadowed by repression to civil rights movements, as was happening in many other countries that year.

Mexican cultural agents had long incorporated popular arts as part of their cultural diplomacy strategies: this exhibition was one such example. In 1969, the Olympic Committee bequeathed the popular arts collection to the Universidad Nacional Autónoma de México (UNAM) where it was stored and sporadically exhibited. In 2016 a group of curators and students of UNAM’s graduate Art History program, organized an exhibition that revised the history of the 1968 popular arts exhibition and highlighted objects from the collection to address problems of cultural diplomacy, display strategies and shifting definitions of artisanal design, craft, folk art and arte popular. This talk will address both iterations of the exhibition and propose some partial results of my ongoing research on arte popular between 1940 and 1970 in Mexico.