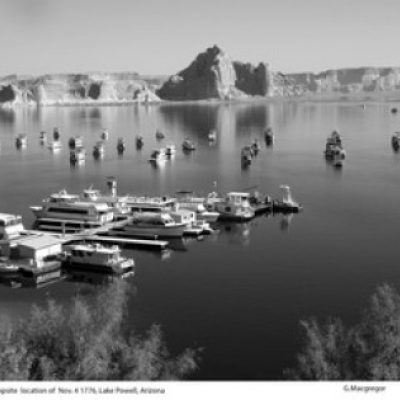 
In the Summer of 1776, two Franciscan Friars left Santa Fe on a journey to find an overland route to the only other Spanish settlement : Monterey, California. Although they never achieved this goal they instead circumnavigated the Colorado Plateau, created the first map of this region and documented the customs and living situations of the Ute Indians who occupied the regions north of Santa Fe and as far west as the Great Salt Lake. The journey covered 1800 miles and took six months.

Over a five year period Greg Mac Gregor and Siegfreid Halus (now deceased)   retraced this route and photographed the terrain and legacy of this expedition.

The photographs in the lecture are from the book : In Search of Dominguez and Escalante (Museum of New Mexico Press) by Mac Gregor and Halus and will be on exhibition at the Palace of the Governors , Santa Fe, during the year 2020.

Greg Mac Gregor is Professor Emeritus of Art and Photography from the California State University , East Bay. Past photo projects of trans- Mississippi exploration and travel include :The California Emigrant trail of 1841-1870;   The Oregon Emigrant Trail;   The Lewis and Clark Expedition; The Mormon Emigrant Trail; and The Transcontinental Railroad of 1869. He has had eighty exhibitions of these projects both domestic and foreign, and published four books.

The late Siegfreid Halus , was former professor of Photography at Tufts University . He also was the director of the Art department at the Santa Fe Community College and the author ( along with Marie Romero Cash) of Living Shrines : Home Alters of New Mexico (Museum of New Mexico Press). As an exhibiting photographer he had extensive national and international exposure and authored many articles on art and photography.