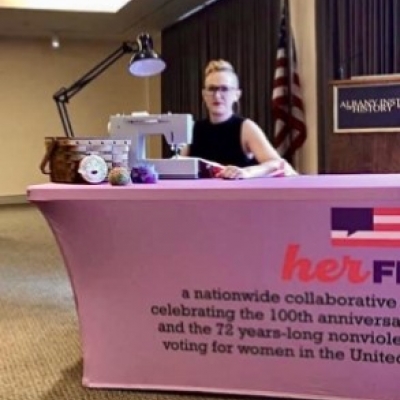 
In the interest of public health, Marilyn has decided to cancel her live performance in Santa Fe. Instead, she’ll be live-streaming the sewing from the Her Flag Facebook and Instagram pages at the set time of the event.

In 2020 America will celebrate the 100th anniversary of the 19th Amendment, which opened the door to give women the right to vote. One celebration is so big it had to start in 2019! It will ultimately take 14 months to complete! This celebration is growing in size and impact as it travels to capital cities in each of the 36 states that voted to pass the amendment, in the order in which they ratified. Ultimately this celebration will measure 18 feet in height and 26 feet in width!  This celebration is epic in every sense of the word.

The celebration is called Her Flag. Her Flag is a giant collaborative art flag. A work-in-progress that’s making its way across the nation, growing stripe by stripe and state by state.  Her Flag will be in Santa Fe, New Mexico on Thursday, April 30th 2020.

Founder, artist Marilyn Artus, sews each state’s stripe, which was designed by a woman artist in that state, onto the flag at a live event in each capital city. This is her “love letter” to all the men and women who worked to pass the 19th amendment and she uses it as a platform to encourage women to exercise their right that so many fought for just 100 years ago.

New Mexico, the 32nd state to ratify, will be represented by the 32nd stripe sewn onto Her Flag About Marilyn Artus and Her Flag

Marilyn Artus lives in Oklahoma City, Oklahoma. She worked as a designer in the gift industry for thirteen years and in 2008 she became a full time visual artist. She has been using the American flag in her recent works and has created tribute works to Susan B. Anthony, Victoria Woodhull, Gloria Steinem, Ida B. Wells, Candy Darling and Beyoncé. Learn more about this project at www.herflag.com

Laurel Garcia Colvin’s recent work of mixed media drawings and installations uses the French 18th century designs of Toile de Jouy as the starting point. She juxtaposes the background printed fabric narrative of a pastoral past populated by idyllic figures with a foreground of contemporary situations. Homelessness, gun violence, women’s rights and other current social or political controversies are in direct contrast to the nostalgic, sanitized, leisurely decorum of these historical toile patterns. These works delve into the world of reality, fantasy and history, and provide a visual space to reflect on and reconsider the relationship between what remains, what is scrapped and what is made new in society’s collective consciousness. Ms. Colvin Garcia’s work has been exhibited in galleries and art fairs in New York City and throughout the United States and Europe. Her works are in private and corporate collections throughout the United States and Europe. She received NYSCA and NEA artist funding for two separate exhibition installations. She received a Puffin Foundation Grant, and was awarded a residency at the Constance Saltonstall Foundation for the Arts in Ithaca, New York, and a residency at Bullseye Glass Resource Center in Santa Fe. Ms. Colvin Garcia received her MFA and BFA from the University of Texas in Austin, and did post-graduate studies at Pratt Institute. She was on the art faculty in the Art Department of the University of Texas in Austin before moving to New York City in 1986. She lives and maintains studios in Long Island City, New York and Santa Fe, New Mexico.

“The enormous contribution of women to this country and the world has been largely ignored in various historical narratives. These women’s struggles, often at great personal and professional cost, against the accepted societal feminine norms of their day gave individual women today the right to vote, the right to family planning, the ability to speak our opinions in private and public, the right to protect ourselves from physical and sexual attacks, the right to own property, and the right to pursue any career, professional and, or educational goals we so desire. They corrected for all of us the bias and accepted gender hierarchy stated in The Declaration of the Independence, and made real what was stated in the approved Declaration of Sentiments read by Elizabeth Cady Stanton at the Women’s Rights Convention held in Seneca Falls, NY in July 1848, ‘We hold these truths to be self-evident: that all men and women are created equal; that they are endowed by their Creator with certain inalienable rights; that among these are life, liberty, and the pursuit of happiness; that to secure these rights governments are instituted, deriving their just powers from the consent of the governed.’ I am proud to be an artist contributor to the HERFlag Project to raise awareness of the women (and men) who helped ratify the 19th Amendment in the State of New Mexico.” –Laurel Garcia Colvin www.laurelgarciacolvin.com

Michelle Otero is the Poet Laureate of Albuquerque and the author of Malinche’s Daughter . Herwork has appeared, or is forthcoming, on the Modern Love Podcast , NPR’s Code Switch , and in New Mexico Magazine , Shenandoah , and The Best of Brevity Anthology . Originally from Deming, New Mexico, she holds a B.A. in History from Harvard College and an MFA in Creative Writing from Vermont College. She is a member of Macondo Writer’s Workshop and a founding member of Albuquerque’s TIASO Artist Collective. 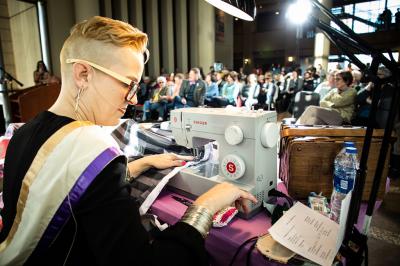 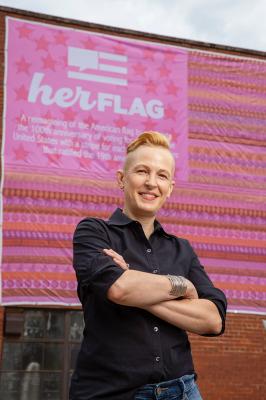 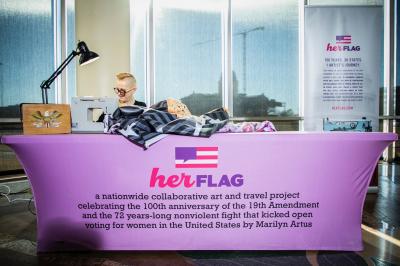